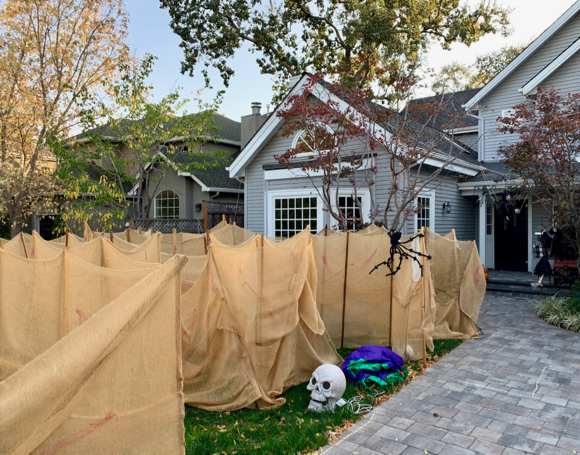 A couple of years age we talked to William Floyd about the Halloween maze he constructed in the front yard of his family’s home on Vine St. in Menlo Park. We walked by a few days ago and were struck with how it had evolved. William emailed some comments:

“My maze didn’t really evolve between the first and second Halloween. I made the same thing, building my maze just on the yard, with steaks and burlap, with a different configuration.

“It did evolve this year, however. I wanted to make it bigger, because larger makes it more fun, in my opinion. The problem was I couldn’t use my conventional building because of the change in the ground surface. So after thinking of possibilities, I decided the best option was to use 8′ by 4′ lengths of plywood and put them on hinges to fold to make corners.

“It would be easy to take down, allowing me to set it on the ground last Sunday when the wind was strong. There shouldn’t be any wind on Halloween, and some friends and I will be making sure it stays upright.

“I used most of my driveway, which means I kicked both cars that usually park there out. I didn’t want to be too ambitious and not finish, so the driveway part is smaller than it could be, and next year I will  expand it even further because now I know that it doesn’t require as much work as I thought.

“This year, I also tried to make it scarier, but I’m not sure how well I achieved scariness.

“My goal for next year is to attempt to recreate Chaos House, a haunted house at Great America’s Halloween Haunt.