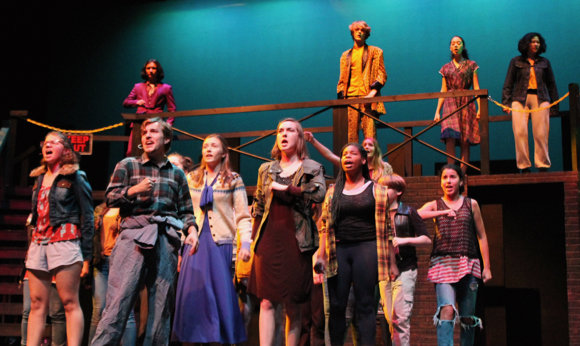 The Tony Award-winning Broadway show Urinetown: The Musical takes the stage over the next two weekends at the Menlo-Atherton High School Performing Arts Center on November 15th-17th and 22nd-24th at 7:30 pm on Fridays and Saturdays, and 2:00 pm on Sundays.

In a light-hearted comedic performance full of satirical song and dance, this irreverent musical tells a tale of a world much like our own, where water has run short for far too long. A large corporation has taken over the government as well as the bathrooms and now charges people to pee. When the oppressed hero rises up –deciding enough is enough and the corporation must fall – chaos and comedy ensue. 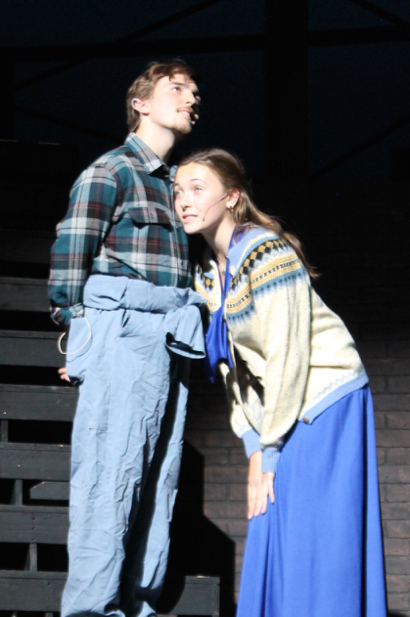 Created by Mark Hollmann and Greg Kotis, Urinetown is an action-packed comedy ready to spark rebellions in many minds. Tickets are available in advance online  – $15 Adults and $12 Students/Seniors – and at the MAHS Performing Arts Center box office thirty minutes before showtime.

M-A senior Milo Brosamer, who has been acting for several years, plays Urinetown’s lead rebel Bobby Strong. Brosamer has participated in M-A Drama since his freshman year and has acted as Lucas Beineke in The Addams Family and Corny Collins in Hairspray. Reflecting on the unique Urinetown production, Brosamer says “The jokes in this show are hilarious and the songs have such high energy. It’s the culmination of months of us really putting in the work.”

The show’s director and M-A Drama teacher Danette Bathauer described the fun creative process that went into producing the show. “The greatest part of doing Urinetown has been incorporating creative ideas from so many students. The show is a satire, so it creates virtually unlimited opportunities to have fun with pop culture as well as with the art form of musical theatre itself.“

Freshman Ryann Barnes, who plays Hope Cladwell, the daughter of the evil corporate CEO, remarked: “The best part of Urinetown is the upbeat, fast-paced music and the direct interaction we have with the audience.” Unlike many other shows, Urinetown repeatedly breaks the “fourth wall,” with characters often speaking directly to the audience, joking about how they are in a musical, and actors even dropping character every now and then.

Filled with excitement, laughs, and rebellion, Urinetown: The Musical, has won three Tony Awards and was a successful hit on Broadway.

My youngest brother, Daniel class of 1973-74(?) at Menlo-Atherton, was in the original Broadway cast of Urinetown!
You should check out the cast Record!
Daniel has also been in the Original Broadway Cast of Pirates of Penzance, Le Bohemia’s, and many others national tours, CATS, TOMMY…

Thanks, Steven. Very interesting. Please let your brother know about the show and please come for a performance.