She offered three pieces of advice: 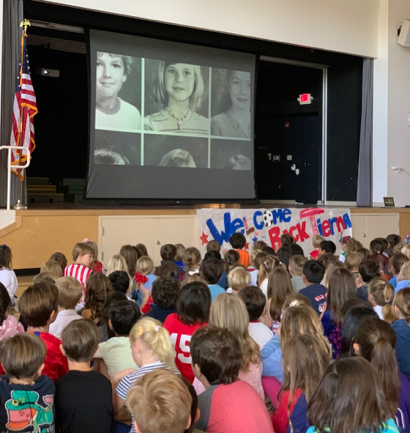 In introducing Tierna, Oak Knoll principal Kristen Garcia reminded the students: “Tierna played on the same playground you play on today. She even had some of the same teachers.”

A number of those teachers along with retired principal David Ackerman were in attendance as was Menlo Park Mayor Ray Mueller who presented Tierna with a proclamation from the city. “Making a good chocolate chip cookie takes a lot of hard work,” the Mayor said, addressing the audience in kid terms. “We’re honoring Tierna today because she made a really, really good chocolate chip cookie…It’s not just the Gold Medal. It’s all the hard work she put in to get there.”

The Oak Knoll students had submitted questions for Tierna through their teachers, and a dozen or so were selected for her response.

Tiera recalled mostly playing soccer during recess while an Otter, although she admitted getting caught once for “playing rough tag.”

In addition to soccer, she played baseball and basketball and swam — as well as dabbling, very briefly, into ballet.

While she initially wanted to become an astronaut, she encountered  a fork in the road when she was a sophomore at Sacred Heart Prep. “If I was going to pursue a degree in aeronautics and a career in the space program, I would need to go to one of the military academies. I ultimately decide that wasn’t for me and instead want to Stanford and played soccer.” 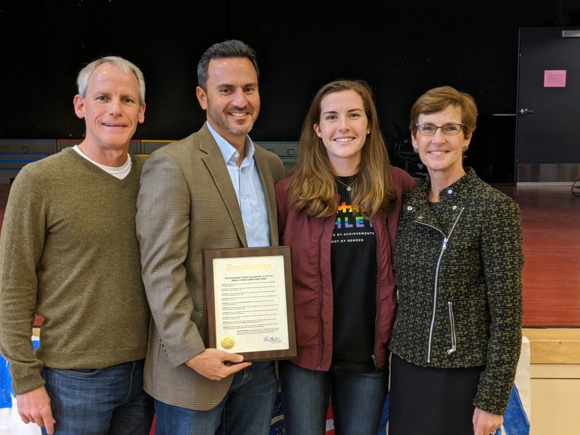 She underscored that a support system was absolutely essential to reaching a high level of competition. “You can’t get to the top by yourself. I had my brother, my parents, my coaches and my teammates.”

She’s uncertain about playing in the Olympics this summer as she’s recovering from an injury. What she is sure about is that throughout her soccer playing days, there was never a time she wanted to quit. “There were times I didn’t love the game as much as I did at other times,” she said. “But you show up because of your teammates.”

Her focus now is on soccer and finishing her degree at Stanford, which she is working on part-time. As to what she’ll do post-soccer, Tierna replied: “That’s a big question as I’m really just starting my soccer career. But maybe it will be in an administrative role with U.S. Soccer.”

Top photo and photo at right by Linda Hubbard (c) 2019; bottom photo of Tierna with her parents Greg Davidson and Helen Wilmot and Mayor Ray Mueller, courtesy of the Mayor