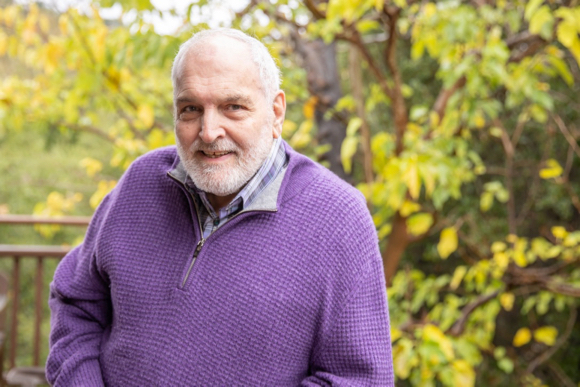 Growing up in Huntingon, West Virginia, author and film buff John Billheimer became a fan of Alfred Hitchcock. “I was an usher at the local movie theater, and the first Hitchcock film I saw was Dial M for Murder,” he recalls. “I still remember the gasp from the audience when the murder scene occurs. Hitchcock took a week to film that scene.”

While John is the author of two fiction series — a mystery series set in Appalachia featuring failure analyst Owen Allison and another featuring Lloyd Keaton, a Midwest sports writer with a gambling problem — he’s also written two non-fiction books, Baseball and the Blame Game, which examines scapegoating in the major leagues, and Hitchcock and the Censors, which traces the rise of movie censorship and  its impact on Alfred Hitchcock.

“When I’m on a book tour, as I’ve been for the last few months, it’s always Hitchcock that people want to hear about,” he says. “During the time his movies were coming out, he was the only universally recognized director.”

Authorship was not top of mind when John moved west to take a job at SRI. “I was educated as an engineer — and engineers aren’t supposed to be good at English!” he says. 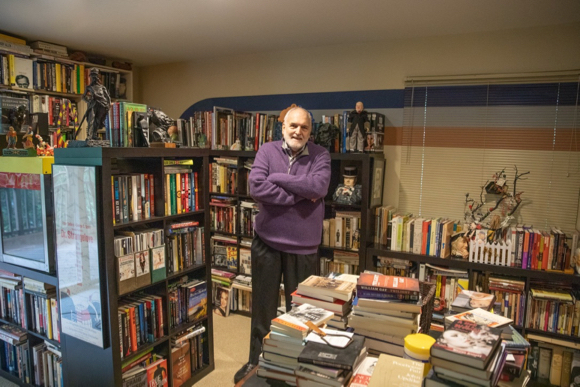 John spent three decades as a consultant for a small firm that focused on transportation research. In that capacity he wrote a lot of reports. “I had a knack for writing and started taking creative writing classes,” he recalls. “I wrote a lot of literary short stories, all that were met with rejection slips. But I enjoyed reading mysteries, so decided I might as well try my hand at writing a mystery.”

His most recent mystery is Primary Target, which deals with bogus absentee ballots in a West Virginia election.

The Portola Valley resident’s passion for books and film is evident in a downstairs room filled to the brim with both, the latter in the form of DVDs, as well as lots of memorabilia.

It’s not surprising to learn that an author who writes about baseball is also a baseball fan. “The Cincinnati Reds were the closest team to us growing up but it was the Cleveland Indians that won my heart,” he says. “I’d take the bus to games starting when I was 10 or 11 to watch Bob Feller and Dale Mitchell.”

Today, he roots for both the As and the Giants. “And I still go to see the Indians when they play the As.”

Returning to Hitchcock, we asked if he could pick a favorite: “Rear Window” was his quick reply. “The plot is plausible and it’s perfectly made. It just hangs together so nicely.”

A complete list of John’s books is available on his website. He’ll be appearing at the Menlo Park Library on Feb. 19, 2020. We’ll send out a reminder!

I’m a big fan of Mr Billheimer’s writing. Great to hear more about his Hitchcock book. Thanks.

I’m a huge fan of Billheimer. Read all his books. Lots of humor. Much true history. Fewer “this can’t have happened that way” moments than almost all mystery novels.

He is a better man than he is an author, and he is a brilliant author.

I’ve read Primary Target. John writes carry’s a lot of humor. But the scary thing is the issue it is based on, ballot stuffing, is 100% true, and probably not just in West Virginia.

Can’t want to read the Hitchcock book. We watch his movies whenever they are on. This book will become one of our TV room references.