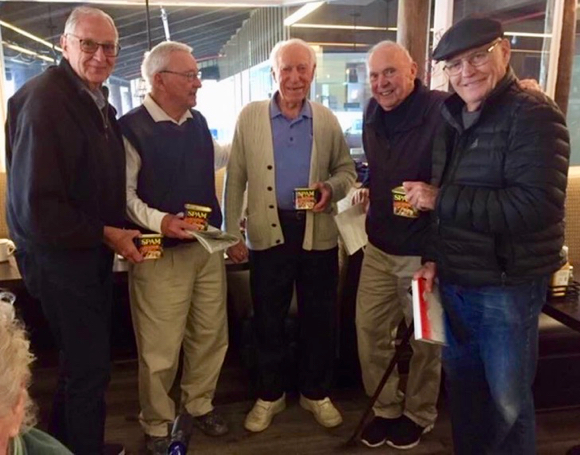 It all started with the following email:

“The attached photo [shown above] is of five men, each of whom served in a different branch of the U.S. Military. Left to right are members of the Marine Corps, Air Force, Army, Coast Guard and Navy.

“Serendipity brought the five men together. In recent months two separate groups made a habit of meeting for breakfast each Thursday at a local restaurant. A chance encounter as the two groups were leaving the restaurant led to a conversation about noticing each other as Thursday regulars.

“During this impromptu meeting, one group mentioned that the U.S. Army member had recently turned 100, and the local newspaper had done a feature story on him. The article described the centurion as a World War II hero who flew 35 missions over Nazi Germany as a B-17 pilot.

“The following week the two tables joined, and it was learned the five men at the table had each served in a different branch of the military. Over ‘war stories’, it was concluded that the one thing the men had in common was a breakfast that featured Spam. The next week, one member of the group brought a can of Spam for each of the others and the above picture was taken.

“If anyone at Hormel feels there is a further story here, I would be happy to provide further information.

“P.S.  Shortly after we met, the 100-year-old went sky-diving to celebrate his birthday. He enjoyed it so much, he plans to make it an annual event.” 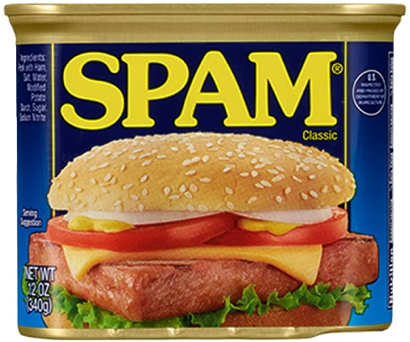 I had no expectations of hearing back from an email sent to a corporate mailbox, however the very next day a woman who identified herself as the Hormel Director of Corporate Communications emailed me and ask if I would send her my phone number because she was excited about the email and wanted to learn more.

After a couple of phone conversations I was informed that Hormel wanted to do a story that featured our group. Not knowing what this entailed, we agreed and were told that someone from Hormel would be in touch.

Long story short, a few weeks later, Hormel asked if they could send a crew to interview us at our usual Thursday breakfast. We agreed and the following week we were blown away when a video crew of nine showed up and proceeded to spend several hours interviewing and taping us.

They informed us that they had arranged for two military aircraft to feature our 100-year-old flying (in a dual piloted cockpit) and doing some aerobatics. The next morning we traveled to the Livermore Airport, and they proceeded to do more videotaping.

A few weeks passed and we got a call telling us the video was ready and Hormel wanted to arrange a preview for us. The following Thursday we met at our usual spot and were met by members of the video crew along with a couple of executives from Hormel.

After previewing the video, we were informed that Hormel was very excited about using it to launch a national campaign to restaurants inviting them to establish an “honor table” in their location that would be reserved for veterans to meet and share experiences. They said if we agreed to become Spambassadors they would present the idea to their Board of Directors and start plans to launch the program. We all agreed and that is now where things stand.