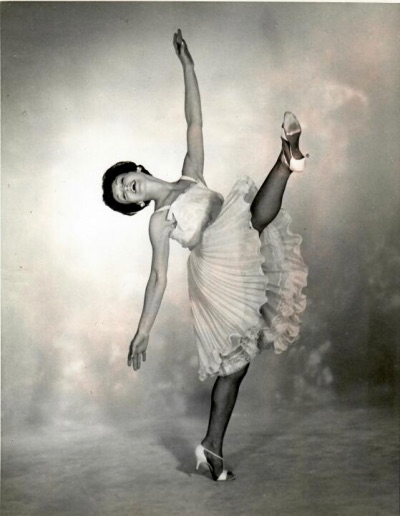 A chance encounter led to her first exposure to dance. Growing up in Muskogee, OK, her sister would walk a friend to dance lessons across town. One day her sister couldn’t go, so RoseAnn went in her place.

“The lesson was in the living room of a beautiful lady’s home,” she wrote in an autobiographical piece for the Almanac News in 1998. “She sat me in a big overstuffed chair and the lesson proceeded. I was fine until they started tumbling on a mat. I watched and wiggled in that big chair.

“Finally Miss Bonnie asked me if I’d like to try it. Whoa! She taught me a backbend and I haven’t stopped bending since then.”

Growing up in Menlo Park from the ’50s onward, it seemed like every girl in town took lessons from RoseAnn at one time or another. Or like this less than graceful and coordinated writer, attended recitals to watch friends dance.

“When I was three, I was so pigeon toed that Mom took me to learn ballet,” recalled Janet G. writing in the Do You Remember the Old Menlo Park page on Facebook. “Well, of course, way too young, so RoseAnn put me in tap-dancing. I still have the program. This would have been around 1956. Her spunk and graciousness with all those bumbling kids — they just don’t make beauty and patience like that today.”

“She was an amazing teacher, and I have such good memories of my years at Roseanne’s dance studio,” added Jeanne F. “She left quite a legacy of happy memories.”

Lexie P summed up RoseAnn’s contribution succinctly: “[She was] the goodness of growing up in our time.”

During World War II, RoseAnn’s family moved to Stillwater, OK, where she attended high school graduating in two years. While attending Oklahoma State University, she worked for the College Entertainment Board, touring with a professional dance company during the summer.

“College was marvelous,” she wrote in the 1998 autobiographical piece. “I had my dancing school, auditioned and became a baton twirler for college, finished in 3-1/2 years with a B.S. degree and lots of performances for the Bureau. My top marathon was 27 dances performed in one day!”

Moving west, she danced in San Francisco until 1946 before moving to the Peninsula where she danced at the Bon Ton Club near Moffet Field. She would later marry the owner’s son, Lewis Saylor, who preceded her in death.

In 1947, she opened Rose Ann Dance Studio at 1259 El Camino Real. After a short tenure in a four-car garage at 564 University Drive, the studio moved to its present location at 1163 El Camino Real in 1949. The name was changed to Menlo Park Academy of Dance in 1969.

Many of her students became professional dancers, owning their own dance schools and appearing on Broadway and with the San Francisco Ballet.

Those wishing to make a memorial gift are requested by the family to direct it to the Menlo Park Academy of Dance scholarship fund.

I was the mother of nine children when we moved to M.P. A few years later l sought advice from RoseAnn, as I was turning 45, and wanted to know how to stay young forever, as she was doing. In short order I was dancing with RoseAnn, in classes which included many ladies who had danced with her since they were children! Soon my two youngest children were dancing too! And we were performing in fabulous recitals, and having the time of our lives!

We danced in that happy place with RoseAnn for several years, and I had indeed found the fountain of youth, it seemed! But then we moved away. A sad day!
There will never be another RoseAnn! Not even close! She is now teaching the angels in heaven, I’m sure. Thank you, dear RoseAnn, for all the joy you brought to all who knew you! Even if they didn’t dance! I will never forget!