Can you identify the woman in this painting which was framed in Menlo Park? 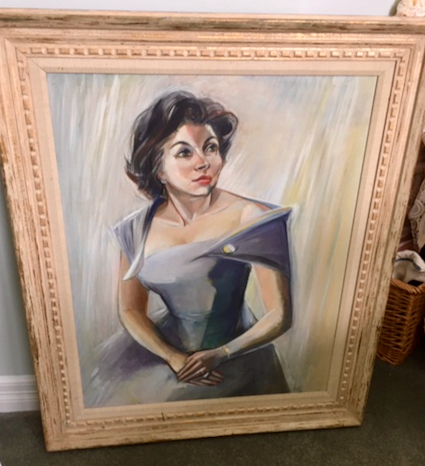 We received an email from Lenore Bernhardt who lives in Washington and had recently discovered — and then purchased — the portrait of a woman shown here. According to notes on the back, it was framed at Herbert W. Keeble Picture Framing at 441 El Camino Real in Menlo Park in 1962.

My almost immediate hunch is that it’s Shirley Temple Black.  When I was a child, I attended a local children’s theater at Sequoia High School and remember her as a volunteer ticket taker. And her daughter Linda was a Sunday School classmate of mine at one time. All to say I’d see her around town when I was a child and teen.

A search of Google Images of the famous child star did nothing to disprove my hunch. Photos of the middle age Mrs. Black do resemble this portrait.

Plus, she stayed on the Peninsula, passing away at age 85 at her home in Woodside in 2014.

Any other guesses as to who the woman in this lovely portrait is?

The picture looks a lot like Elizabeth Taylor at around the age of 25…,

In my honest opinion it looks exactly like your mom.

Does not look like shirley temple black or elizabeth Taylor. Perhaps it may be someone affluent who wanted their portrait painted and hung above the mantle. Common thing done back then

I know the woman she went to my church n passed away a few yrs back.

Nope. Not at all.

This looks like a young Joan Collins, but my guess it more likely a local woman who lived in the area

The portrait looks like it could be Rita Moreno.