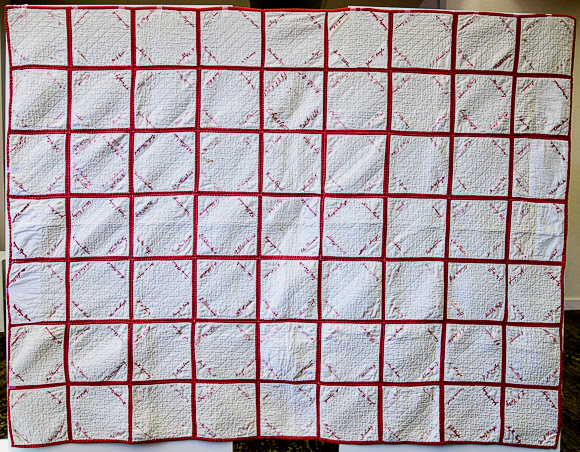 When Menlo Park Historical Association Board Member Martha Lancastremere traveled recently to Las Cruces, New Mexico, she visited the New Mexico Farm & Ranch Heritage Museum where  quilts from the early 1800s were on display. She remembered that MPHA was in possession of  the Menlo Quilt, created in 1894 and described in a story written by Richard “Dick” Houston Barbour when he served as MPHA president (1980-82) shortly before his passing in 1984.

The quilt is presently displayed at the Menlo Park Library (800 Alma Street), in the downstairs display cabinet near the entrance to the MPHA office, along with a list of the names adorning it.

Of particular note is a square honoring four outstanding figures in the Menlo Park area’s history, all living in 1894 when the quilt was made for the Church of the Nativity. Flood and Doyle were undoubtedly Catholic. Felton attended Episcopal services as did Stanford, once Holy Trinity Church was established. Likely, Hopkins was also an Episcopalian. Perhaps, the four sponsored the quilt or made a donation in some manner, for which the quilt square honors them. 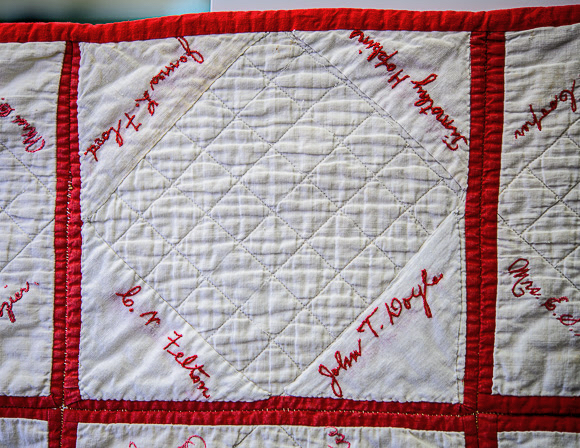 Upper right: Timothy Hopkins, 1859-1936, the adopted son of the widow of Mark Hopkins,  and the inheritor of the estate where the Menlo Park Civic Center now sits. Working in conjunction as railroad treasurer with Senator Leland Stanford, Hopkins bought and mapped out what is the original boundaries of Palo Alto.

Lower right: John T. (Thomas) Doyle, 1819-1906, a highly regarded attorney, who owned the Ringwood estate on the east side of Middlefield Road, next to the Flood estate.

Lower left: C. N. (Charles Norton) Felton, 1832-1914, Republican Senator from California, who served in the Senate alongside Stanford. He named his mansion Felton Gables, later used for the subdivision’s name.

“This is the season when chilly nights, and white sales turn our attention to comfortable bedding. What better time, then, to mention one of the more unique items in the archives of the Menlo Park Historical Association – the Menlo Quilt.

“A sure-fire way to raise funds for a charitable cause or church project during our town’s youthful years was the making of what might be described as a co-op quilt. This was somewhat before fashion teas and Tally-Hos, but was, nonetheless, so popular that many would-be donors could not be included. 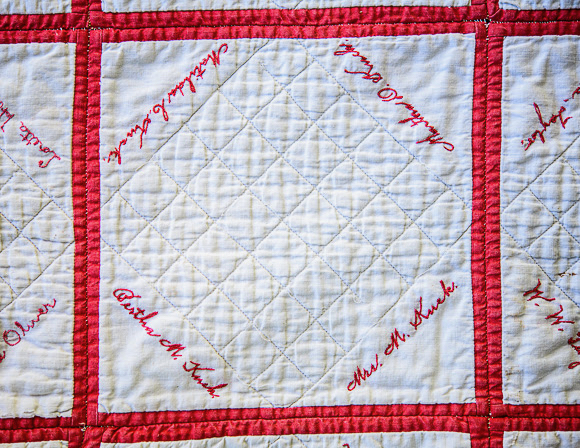 “The Menlo Quilt is a priceless example, and, so far as is know, the only survivor of this remarkable community craft. It was produced by the dedicated ladies of the Church of the Nativity in 1894 and had a double-barreled technique for fund raising.

“First, the ladies purchased small triangular pieces of material for the privilege of having their names included in the finished product. Some purchased additional spaces for husbands and others in the immediate family. Names were then stitched in sturdy red thread along the lines of penciled signatures to form embroidered autographs. The next step was to sew four of the individual angular pieces together to form a square. Finally, 80 squares were assembled into the finished quilt measuring 5 feet 4 inches by 7 feet in length. The border and trimming is also stitching on white.

“Thus, 320 individual name spaces were sold and sewn on a first-come, first-served basis, and it is said that at the opening of the sale there was a stampede of buyers. Many of the more prominent families of the 1890s are represented and 24 of them occupy all four corners of a given square. 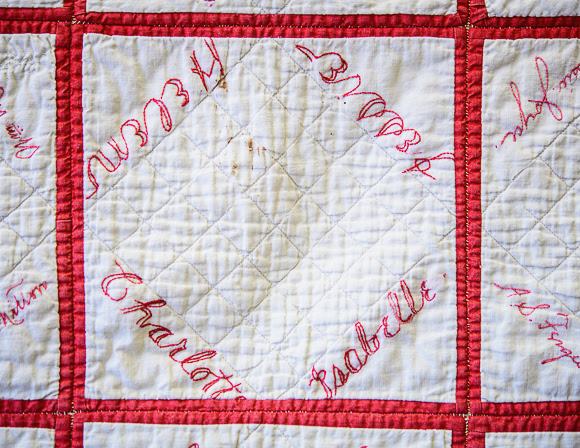 “Leading the list of names is Doyle which probably includes the families of both the Southern Pacific attorney and relatives of the co-owner of the town’s leading mercantile establishment. The latter’s partner, Duff, is one of the next largest family representations. Other well-remembered family names include the Cooleys, the O’Keefes, the Taylors, and the hotel-owning Kucks as well as several dozen more.

“The other fund-raising aspect of the quilt undertaking was the raffle to determine final owner, and it can be imagined that husbands of the good ladies who had purchased name spaces were loaded with raffle tickets, thereby assuring a tidy income for a Church of the Nativity project.

“The lucky winner, announced at a church bazaar, was Mollie Doyle who cherished it during her lifetime. In 1974 during our Centennial observance, her children presented the quilt to the Historical Association ‘in memory of one of Menlo Park’s most lovable ladies – Mollie Doyle Flinn.’”