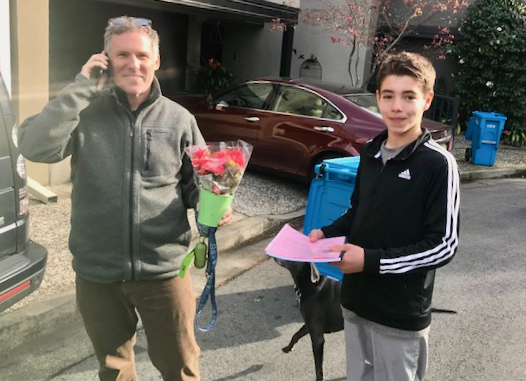 Park Forest Plus Prepare, a new neighborhood organization dedicated to mutual help in the community, sprang into action yesterday, distributing 95 copies of the Citizen’s Guide to the Covid-19 Pandemic to residences in the Park Forest neighborhood of Menlo Park. Park Forest is an area of some 85 townhouses bordered by El Camino Real, Stone Pine Lane and Buckthorn Way.

Founded by four residents — Susan Neville, Peter Carpenter, Scott Barnum and Fred Rose — Park Forest Plus Prepare  is guided by more than 12 “Block Preparedness Coordinators,” who each are communication points for small groups of houses in their area. They in turn will report to three “Neighborhood Coordinators.” It’s a purposely diffuse structure meant to operate at the level closest to area residents.

The group is somewhat unique. “This is not a political movement or influence group. And we are not a nursing or medical entity. This is about advanced preparations, organization and the rendering of help,” Park Forest Plus Response said in an introductory letter to residents.

“Our hopes are these: that now, in times when people are in quarantine and needing food, or simply in need of a helping hand, we can organize as a group to provide those — that it won’t seem to be a stranger you turn to but a neighbor whose name and face you know,” the letter added.

In its distribution on March 17, Park Forest Plus Prepare, handed out the 62-page “Citizen’s Guide” which  is full of details in five chapters, from the opening chapter of general information to a final detailed look at the disease’s epidemiological recovery in what are projected to be recurring waves of attack by the virus.

The Citizen’s Guide has been issued in other languages and is now being translated into Spanish. The ambitious publication was sponsored by Peter Carpenter and his wife Jane. Peter was central to the formation of Park Forest Plus Prepare and was a former longtime board member of the Menlo Park Fire Protection District. Each copy of the guide was delivered with a plant, symbolizing neighbors’ care for each other. You can read the Guide online.

Park Forest Plus Prepare’s structure is designed for a lengthy period of area recovery from the disease. This won’t be easy, according to Peter. “There are going to be very sick people who don’t have anywhere to go and need care with practical errands such as buying food.”

The message here is straightforward: “Now is the time to get organized,” he added.

Indeed, Park Forest Plus Prepare sees itself leading the way. “All neighborhoods should take steps to care for their residents. If we can be a model — great” said Susan Neville.

“We will be part of a beautiful multiple neighborhood construct that will hopefully encompass all of Menlo Park soon,” added Scott Barnum.

Peter noted that there are a few communities with organizations, including Atherton. But many neighborhoods await.

“We have people’s attention,” he said. “Now we’re fertilizing the grass roots.”