Neighborhood walking: A visit to the last surviving Grand Dame of Menlo Park 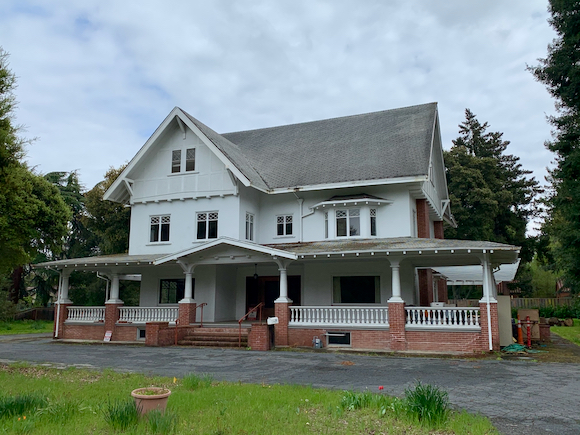 Editor’s note: We received an email from neighbors of this small lane today and ask that you read about but not visit this historic home: “We had an influx of people today. Many residents on this small road are in high-risk groups for coronavirus & would prefer not to be a tourist attraction at this time.”

The late 19th century was a time when wealthy families in San Francisco followed the rail line to the Peninsula to build elegant summer homes. Most of these Grand Dames long ago died or have been institutionalized. In Menlo Park, only 10 Maywood Lane remains as a family residence. 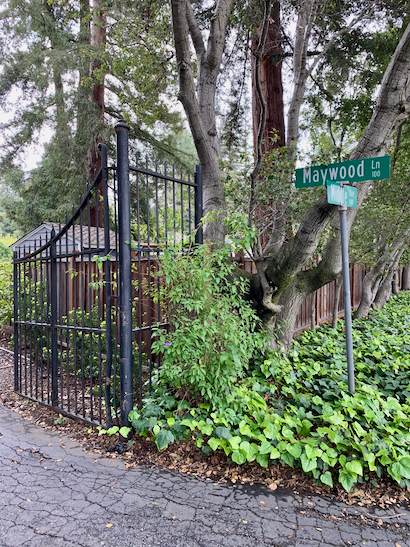 This 8,000 square foot mansion (three floors plus a full basement) was built over a three-year period (1907-1910) by Andrew Jackson Clunie, a wealthy San Francisco lawyer and onetime California Insurance Commissioner. Clunie was very particular about the materials used in the house. The wood must not have any knots. Supposedly three other houses were built with the wood he rejected.

The first two floors have about a dozen large rooms surrounding a grand open staircase area finished with wood paneling. A unique feature of the house is an air moat built under the veranda that surrounds three-quarters of the house. The cool air trapped in the moat moderates the temperature inside the house, cooling it in hot weather, providing insulation on cold days.

The original property extended from Middle Avenue south to San Francisquito Creek, and from San Mateo Drive to several blocks east. The original driveway – now a private lane – begins at the still-standing gate on Middle Avenue. It winds its way past a dozen or so homes that have resulted from various subdivisions of the property and then suddenly terminates at this magnificent structure. The house was last purchased in 1950 by Robert Oakford (1918-2008), later to become a professor of industrial engineering at Stanford University. His surviving family is still resident. [2020 update: Real estate records indicate the home was sold in 2017.]

Stepson Don Smith, who believes the house is a Victorian, was good enough to give us a tour recently. What makes the house so impressive is that there has been so little remodeling inside. That makes it a little antiquated in function, but then again it fits. From the third floor (unfinished), looking out the front, you see only lawn, trees and bushes. The neighboring houses in that direction are almost invisible.

The west wall, including the chimney, damaged years ago in a storm and only partially repaired by the Oakfords, appears bow to be fully restored. So this gives hope that the kitchen has been enlarged and modernized.

We had an influx of people today. Many residents on this small road are in high-risk groups for coronavirus, & would prefer not to be a tourist attraction at this time.

My friends lived a few houses over growing up as kids and we would tell everyone it was Haunted! Lol