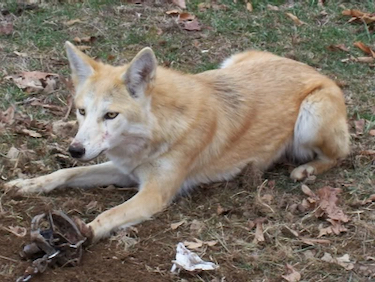 Editor’s note: To support authors with a poetic bent and provide another ray of light in dark times, we’ll be using poems from local poets from time to time on InMenlo. This is from Charlotte Muse, who writes: “I’m this sending along in solidarity with the people of Mill Valley, who’ve been howling at the moon while sheltering in place”

Charlotte has a few copies left of her chapbook, A Story Also Grows, which costs $10.00; you can email her. Chester Creek Press, made a beautiful handmade edition of it which was bought by both the Smithsonian and the Library of Congress, as well as Brown University and U.C. Santa Cruz. Another of her chapbooks, Violin, is illustrated with paintings by Joyce Savre.

“…One of the ranchers…in the hills of Raymond had a she-dog and the coyotes used to come down in the night to visit that she-dog. And now just listen, that she-dog gave birth to half-breeds– of dog and coyote. And when Tony was over there herding sheep, they had one of those dogs…” — Ascension Solorsano

You can bend half a coyote to herding sheep.
Not a whole one. After they trained the half-breed,
he was good at his job.
The dog half wouldn’t harm the sheep,
the coyote had an eye out for trickery.
He was wild with suspicion, crazy with it,
but he kept the sheep in line,
dog obedient, coyote watchful,
both parts ready to run.
There was one who didn’t trust fences!
The coyote knew nothing of regret
and the dog sang only out of pain
until each half taught the other how to sing.
If you ever heard that half-breed at night,
you dldn’t want to leave him
alone with the moon.