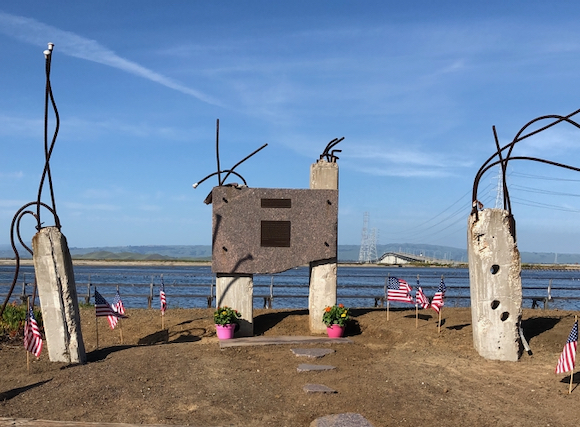 Twenty five years after responding to the Oklahoma City Bombing, members of California Urban Search and Rescue Task Force 3 did not head back to Oklahoma City nor did they have a local service at the memorial they built at their Training Center in Menlo Park (pictured above), due to the COVID 19 pandemic.

Sixty four firefighters and civilian technical specialists along with four search dogs responded to the act of domestic terrorism that killed 168 people, of which 19 were children, and injuring another 759 others.

Here is the report from then Captain, now Fire Chief, Harold Schapelhouman about the Oklahoma bombing 25 years ago today (April 19). The photo was taken today at Oklahoma City Bombing Memorial at the Baylands Rescue Training Center. The 1995 report:

At 9:02 am on April 19, 1995, a 4,800 pound ammonium nitrate/fuel bomb, hidden inside a Ryder rental truck, exploded 20 feet from the rear of the Alfred P. Murrah Federal Building in downtown Oklahoma City.

The explosion created a supersonic shock wave that slammed into the front of the building at nearly 40,000 feet per second turning the building’s glass windows into thousands of pounds of shrapnel, causing structural supporting columns and floors to fail at lower levels of the nine story structure.

As the structure was destabilized, a progressive domino collapse began. As a result, almost the entire rear portion of the structure disappeared, and nine floors, at least one bay deep, collapsed into a thirty foot high debris pile containing concrete, computers, desks, filing cabinets and the occupants of each floor.

Before the dust cleared, Oklahoma City fire crews arrived on-scene to the worst case of domestic terrorism ever to strike the United States. In three hours, fire crews and hundreds of other emergency professionals and civilian volunteers dealt heroically with over 475 victims injured by the blast. In the end, 168 people lost their lives in the incident.

Within the hours, days and weeks after the explosion, eleven Federal Emergency Management Agency (F.E.M.A) sponsored Urban Search and Rescue (US&R) Task Forces responded to the incident. The Murrah Federal Building disaster became one of the largest fire and mutual aid incidents in the history of the United States.

Including the members of the California Office of Emergency Services who were involved with the Incident Support Team (I.S.T), 350 dedicated emergency workers from the state of California responded. What they saw changed many of their lives forever, what they did, and what they learned will improve California’s ability to handle structural collapse emergencies for years to come.