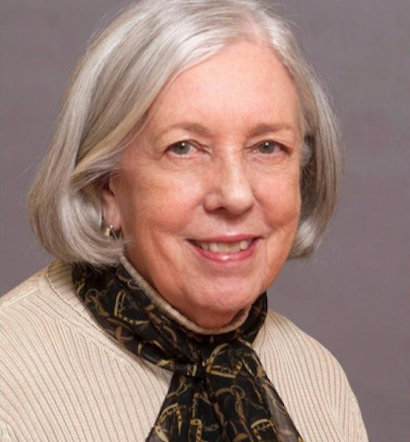 Noted attorney and philanthropist and long-time Atherton resident Margaret Gill passed away on April 17 at age 80.

Margaret was a legendary and groundbreaking business and corporate lawyer in San Francisco and the Silicon Valley. She was a partner at Pillsbury, Madison and Sutro (now Pillsbury Winthrop) for almost 30 years. In 1994 Margaret was asked by Pillsbury’s client Pacific Telesis, if she would leave the Firm to become the Senior Vice President for Legal and External Affairs of AirTouch, the spin off the Cellular business of Pacific Telesis. She served in that position until 1999, when AirTouch was sold to Vodaphone, an international telecommunications firm.

“Brilliant, yes. No doubt about that. Incredibly successful and an inspiration as a female lawyer early on in a man’s world. Absolutely,” emailed The Rev. Frannie Hall Kieschnick, Priest Associate at Trinity Church in Menlo Park.

“I knew Margaret as ageless. Until the very end of her long life so well lived, she was Margaret. Confident. Witty. Caring. Opinionated. Generous with her time, her talent and treasure. Cerebral as she was, she celebrated and sought out the beauty of the arts and cultural institutions from the San Francisco Ballet to King’s College Choir.”

Margaret was educated on the East Coast, but followed her beloved husband Stephen Gill to his native California after graduating from Wellesley College in 1962. She entered Boalt Hall Law School at the University of California, and graduated with a Bachelor of Laws in 1965. She immediately joined San Francisco’s oldest and largest law firm, Pillsbury Madison and Sutro as an associate attorney. She was promoted to partner six years later in 1965.

Margaret was recognized as a special talent from the moment she arrived at Pillsbury. Her intellectual and strategic skills were obvious, and she was asked to work on the most significant transactions at the Firm. In 1975, when only 35 years old, she was asked by the Firm’s client Utah International to be their lead lawyer in the merger of Utah International with General Electric, a $2.2 Billion transaction which at the time was the largest merger in history.

“Margaret was a wise and strong woman, and she and Stephan were a billiant couple in every sense of the word,” emailed Peter Carpenter, who lived nearby the Gills for many years.

Margaret was widely regarded as one the top Merger & Acquisitions defense experts in the United States, and was a principle architect of what became known as the poison pill. Margaret also served as the head of Pillsbury’s corporate group for 15 years. She was a member of the Firm’s Management Committee, and led the Firm’s Partner selection process.

At AirTouch, Margaret worked with the Executive team to grow the nascent cellular business into a global powerhouse. She orchestrated the regulatory and business strategy that shaped the developing cellular marketplace, and opened opportunities for the company. She led the process to get Federal and state approval of the spin off from Telesis, and later for the sale of AirTouch to Vodaphone. Margaret was recognized as one of the most influential General Counsels in America.

Margaret was also a woman of great faith. “Back in the early 1980’s, I visited Trinity Parish in Menlo Park and was invited to lunch by a vestry member, Margaret Gill,” recalled The Rt. Rev. William E. Swing, former Bishop of the Episcopal Diocese of California and founder of United Religious Initiative where Margaret served as a Founding Advisor. “That lunch was foundational in our friendship, and everything that happened after that followed from my first impression.

“Here was someone who was a loyal church person who took the life of faith seriously, who cared about human conditions in the wider world, and who brought a keen mind and an expansive heart to the issues at hand. For almost 40 years after that lunch, Margaret and I were involved with numerous adventures of the spirit and challenges in the real world. And they all rested upon Margaret as a woman of faith.” [Read more of Bishop Swing’s thoughts on Margaret on the URI website.

Margaret’s generosity extended to her community. She served for many years as a Vice Chair of the San Francisco Ballet Board of Trustees, where her wisdom and strategic skills were critical. She served on the Board of the United Way Bay Area, and as the General Counsel of the organization. She was for many years on the Board of Directors of the Episcopal Diocese of California. She was a Trustee of and principle lawyer to the St. Luke’s Hospital Foundation from 1983 to 1993.

Margaret is survived by her husband Stephen, children Elizabeth and Richard, and their families. Plans for a celebration of her life are uncertain given the shelter-in-place restrictions.