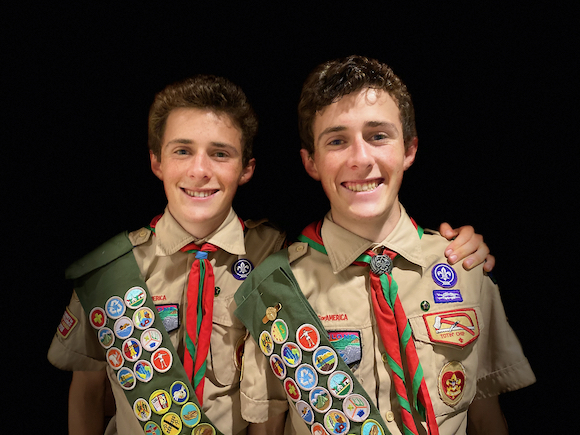 Nolan (right) and Galen Topper achieved the rank of Eagle Scout with Troop 206 and while their Court of Honor has been postponed, they want to share their projects, completed last Fall, with the community. Their love of running in San Mateo County parks led them each to their Eagle projects.

The 17-year-old twins are juniors at Bellarmine College Preparatory and both run for the Varsity cross country and distance track team. Each earned more than 30 merit badges, hiked over 200 miles on troop treks in Bay Area parks and in the Sierra, and participated in many troop community service projects, working on 20 Eagle projects with other Sscouts from Troop 206.

For Galen, the Redwood shaded trails of Huddart County Park connecting Woodside to Skyline Boulevard are a favorite place. He contacted the Huddart Park rangers who helped identify a project and provided site support and tools. During the spring of 2019, Galen reconstructed three horseshoe courts in the West Meadow and Werder picnic areas. He milled the wood planks needed for the project from a fallen redwood tree at a scout camp property in the Santa Cruz mountains. Troop 206 Scouts helped Galen dig post holes and construct the horseshoe courts over several weekends.

After their projects were completed in Fall of 2019, the Topper boys returned to Crystal Springs with the Bellarmine varsity cross country team for the WCAL (West Catholic Athletic League) finals and set the all-time best high school team time, breaking a 34-year record.

Troop 206, chartered by Trinity Episcopal Church in Menlo Park in 1958, has advanced over 200 scouts to the Eagle rank. The troop is outdoor oriented, offering 10 plus outings a year, including camping, skiing, river rafting and backpacking with 48 members ranging from  6th to 12th grade. The troop is holding monthly virtual campfires during the shelter-in-place order and welcomes new scouts 11 years or older. More about Troop 205 at http://www.bsa206.org.

Nolan’s Eagle project on the CSM Crystal Springs Cross Country Course has been fantastic. It turned the course into a first class facility. It is probably
the most utilized xc course in the USA. I RUN(well, I call it flog the course almost every day) which about half way a jog and a walk. Every time I go by a mile marker, I think of Nolan.
These two brothers are the perfect example the greatness of scouting and community service. Nolan’s project should last for decades, maybe centuries.
I hope the Fall Cross Country season will happen. I can’t wait to see all the runners enjoying the course.