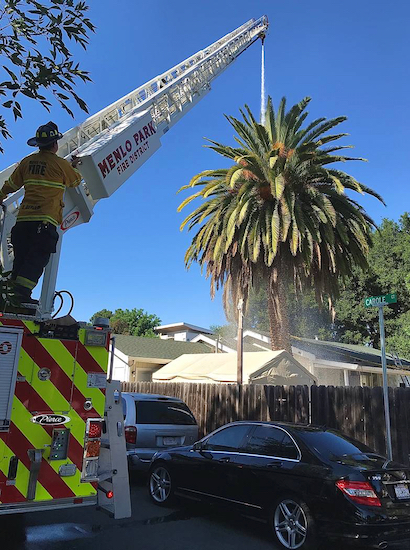 Menlo Park firefighters were kept busy Thursday afternoon when three fires in three hours broke out. The first was an encampment fire in Menlo Park in an area known as the “Triangle” or the open space area bordered by Willow Road, Bayfront Expressway and University Avenue known to be the site of multiple encampments. The second fire was a structure fire behind 847 Bell Street in East Palo Alto, and the third was a reported grass fire that also burned a portion of an eight vehicle carport in East Palo Alto.

At the latter fire, Truck 2 with Acting Captain Brian Berger took up a position on Carol Court and used the 107 foot aerial ladder and a high pressure master stream of water to extinguish a palm tree that has started to smoke and threatened to spread embers throughout the area if it ignited.