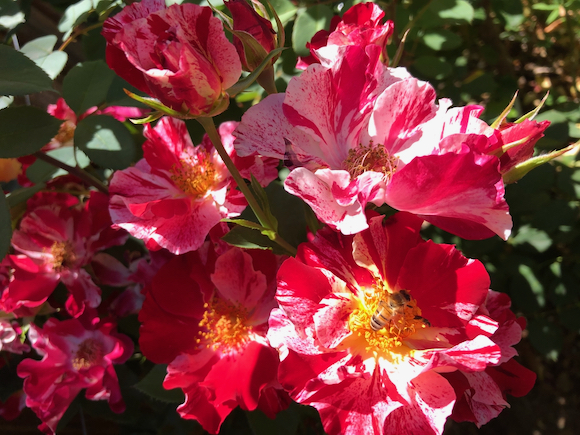 Menlo Park resident Stuart Dalton, a member of the Peninsula Rose Society, emailed wonderful photographs of the “4th of July” roses growing in his garden. “It is a large flower climber,” he explains. 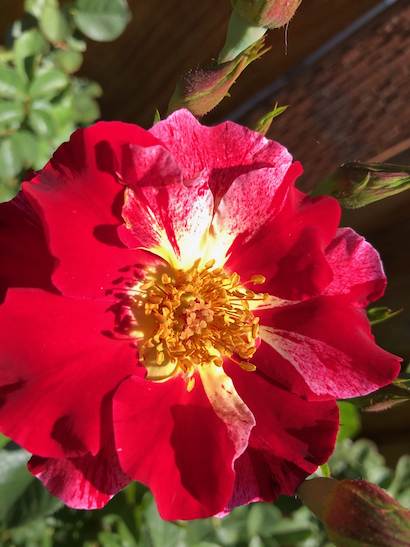 We hadn’t heard of “4th of July” roses and found some background about them on the Jackson & Perkins website:

“You may not see fireworks, but you’ll love the explosion of color displayed in Fourth of July™, an All-America Rose Selections Award winner and popular favorite! This fragrant, repeat-bloomer is considered one of the best Roses introduced in the last few decades!

“The child of ‘Roller Coaster’ x ‘Altissimo,’ Fourth of July™ was the result of three years of formal trials, an unusually long period generally reserved for special cultivars. The time proved well worth it when it won an AARS Award in its debut year, the first climber to win such an honor in a quarter century.

“With clusters of bright white, semi-double flowers accented by deep red stripes, Fourth of July™ may be closer than any other Rose of resembling an American Flag! Featuring between 10 and 16 velvety petals, the 4½-inch blooms contain an intoxicating fragrance, fittingly much like that of freshly baked, homemade apple pie. Especially vigorous early in the season, they repeat throughout the entire summer. The re-blooming begins the first year!”