Historic moment for climate! Menlo Park is going for zero carbon by 2030! 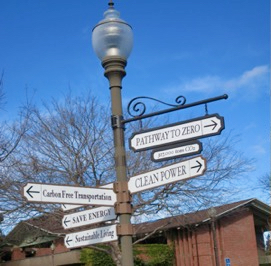 On Tuesday, July 14, Menlo Park became the first city in the U.S. to commit to becoming zero carbon by 2030! The newly adopted climate action plan (CAP) includes groundbreaking measures phasing out fossil fuel use throughout the city – and prioritizing racial justice.

Background: Last year, the City declared a climate emergency and committed to addressing climate change by adopting a new CAP that aspires to carbon neutrality. In a recent Black Lives Matter resolution (No. 6563), the City also prioritized climate action and empowered the City’s environmental leadership, recognizing that the most vulnerable residents are the most affected by this global issue.

Menlo Park has adopted one of the strongest climate targets of any city, the closest being Palo Alto’s 80% GHG reduction target by 2030. We know of no other city in the U.S. going for zero carbon by 2030. Menlo Park plans to accomplish this through 90% greenhouse gas reductions and 10% carbon removal.

Although we are in the midst of a global pandemic and resulting economic turmoil, the impacts of climate change have not slowed. The climate crisis continues, and Menlo Park is uniquely vulnerable with residents in Belle Haven disproportionately impacted by significant flooding from sea level rise expected to worsen in the next few decades. There is scientific consensus that if we want to avoid the very worst and irreversible impacts of climate change, we must dramatically reduce Greenhouse Gas (GHG) emissions by 2030 through rapid, far-reaching, and un-precedented measures.

The City of Menlo Park has truly stepped up as a climate leader. The Climate Action Plan adopted yesterday includes four core strategies to dramatically reduce carbon pollution:
– Phase out Fossil Gas use in homes & buildings (through clean, zero emission heaters, water heaters and appliances as they are replaced), with a target of a 95% transition by 2030;
– Support and advance a transition to electric vehicles (EVs) with reduced gasoline sales, expanded EV charging, and City Fleet leadership;
– Reduce traffic through measures making the City easier to navigate without a car, and increasing housing downtown; and
– Eliminate the use of fossil fuels from municipal operations.

One step that should be taken soon is to ban gas-powered leaf blowers and lawn mowers. These tools use polluting (and noisy!) two-stroke engines that have few or no emission controls.

It is 2020 now: lithium-ion batteries can propel cars for hundreds of miles. Surely,
batteries are powerful enough for gardening.

Hi Diane, Congratulations on this monumental decision. I am sure that community involvement and pressure had a lot to do with it. But as the link posted by Tree Hugger above shows, Ann Arbor Michigan published a plan in March this year to achieve carbon neutrality by 2030. Thanks again for helping set the pace – we need to use you r and Ann Arbor’s successes to promote more communities adopting real carbon emissions elimination goals!

Chris and TreeHugger, thanks for posting about Ann Arbor. That’s fantastic that Ann Arbor and some other great American Cities are going for zero carbon or climate neutral! I hope that more cities will join and start working together on the measures needed to eliminate carbon pollution.

One of the things that sets Menlo Park’s Climate Action Plan apart from the resolutions for a Climate Emergency, is that a group of climate experts who live in Menlo Park and volunteer their time on the Environmental Quality Commission, took a deep dive into climate measures to analyze exactly what measures are needed by the city to reach zero carbon by 2030. Instead of recommending carbon offsets, they evaluated different types of carbon removal strategies like regenerative agriculture, forrest restoration, and carbon negative building materials to take care of the last 10% of carbon emissions that are hard to reduce (e.g. old cars and heaters). Their detailed analysis of the climate measures making up the 90% GHG reduction by 2030 is available for everyone to use. I hope that will spur collaborations with Ann Arbor and other cities starting to formulate Climate Plans from their resolutions.

Hi Daine, would love to chat with you about this some more. I am coordinating a statewide effort to help cities, counties and other jurisdiction like Sacramento Municipal Utilities District (adopted a CED on 7/16) to move into Climate Emergency mode. Not seeing your email address or contact info on the Menlo Spark website, I will leave you mine here: chris.brown@climatemobilization.org. Looking forward to collaborating with you.