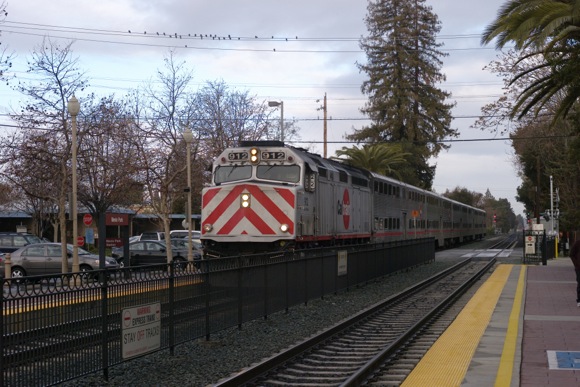 It looks like San Francisco decided to take its railroad and go home.

Except, of course, that it’s not San Francisco’s railroad, which is why they want to destroy it.

The decision by San Francisco to kill the long-awaited regional funding source that would save Caltrain for all time is selfish, short-sighted, parochial, arrogant and plainly boneheaded. Ordinarily, it would be incomprehensible, except for this simple reality: San Francisco doesn’t care about Caltrain. San Francisco cares only about San Francisco.

If they can’t run it, they are happy to kill it.

According to Walton, “all important Caltrain decisions have to gel and be good for SamTrans, which is not always what is best for Caltrain.”

He actually has said it more succinctly in the past, but Walton basically is asserting that SamTrans runs Caltrain to the benefit of SamTrans. The irony is almost overwhelming.

Throughout the history of Caltrain, SamTrans has sacrificed for the betterment of Caltrain. Countless times and to a degree unmatched — unapproached — by the other two partners, San Francisco and Santa Clara County.

But let’s assume I don’t know anything about it. Does Walton?

It’s time for him to put up. Name an instance in which SamTrans acted in a way to undermine Caltrain. I don’t think he really knows, or cares. He wants to undermine Caltrain and its management by SamTrans. Why? Because he thinks the big players — San Francisco and Santa Clara County — should be running Caltrain.

What would make this laughable is that they can’t even run their own transit system. Meanwhile, Walton and his colleagues are using a phony reason to act in a profoundly selfish manner. It won’t be the last time.

I’ve written this before. San Mateo County has to begin throwing some regional weight around. Nowhere is that more abundantly clear than at Caltrain. If it was up to the leadership in the other two counties, Caltrain would make two stops in San Mateo County.

Editor’s note: The San Francisco Chronicle reports that San Francisco Supervisor Matt Haney is attempting to resurrect the sales tax after two of his colleagues teamed to scuttle it.

Mark Simon is a veteran journalist, including political writer and columnist for the Peninsula Times Tribune and 15 years as an executive at SamTrans and Caltrain. The was originally published in the San Mateo Daily Journal; used with permission.

Caltrain is running empty trains due to the Covid-19 crisis, and is asking for a tax hike to keep them going. That’s ludicrous!! Now is the perfect time to shut down all Caltrain trains, and finish the electrification project. Without active trains passing by, construction crews can work 24 x 7, to complete all track related work. When Covid-19 has passed, offices are allowing workers inside, and commuters are commuting, bring Caltrain back as an electrified service.