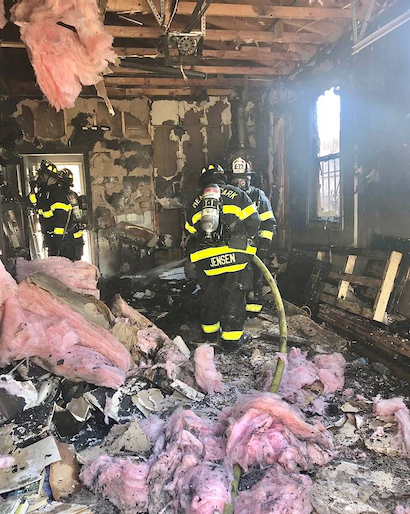 San Mateo County Public Safety Communications Center (PSC) received a single call from a watchful neighbor who reported smoke coming from a single story home on the 1300 block of Madera Avenue in the Belle Haven neighborhood of Menlo Park at 11:57 am, Tuesday morning. Shortly before the firefighters arrived, neighbors also reported hearing some type of explosion.

Menlo Engine 77 with Captain/Paramedic Tony Eggimann and crew arrived on-scene at 12:01 pm and reported a working structure fire, with heavy smoke coming from the garage area of the home. After forcing entry into the home and garage area, firefighters quickly knocked down the fire by 12:10 pm and searched the smoke-filled home. No one was home but firefighters found numerous bug fogging canisters all over the home.

A total of four fire Engines, a Rescue Company, Ladder Truck and two Battalion Chiefs responded with a total of 20 personnel. Fire Investigators responded and Fire Marshal Jon Johnston determined that the cause of the fire was “accidental,”, a hot water heater pilot flame appeared to be the ignition for the activated bug fogging canisters.

“This isn’t the first time we have had a fire caused by one of these bug bombs,” said Fire Chief Harold Schapelhouman. “No one was at home today, but the fire and extinguishment efforts caused over $175k in structural damage and an additional $30k in property loss to this single story, 1,400 square foot home. The building was last updated in 2011 at a time when it was not required to install a residential sprinkler system that would have easily stopped the fire. That said, the quick action and observation of the neighbor who called 911 prevented this from being much, much worse.”