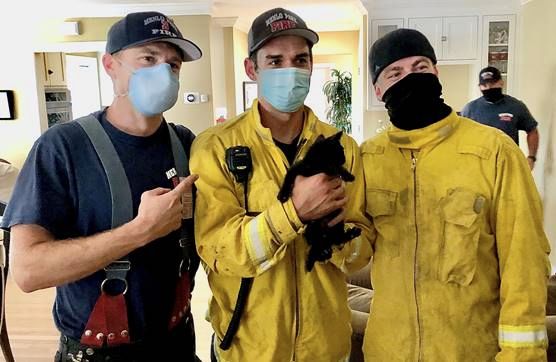 A call from a resident on Gordon Avenue in Menlo Park asking for help to find a kitten that had crawled into a missing heater register and dropped into ducting under the home resulted in the arrival of Menlo Engine 3.

After talking to the resident, Acting Captain Dave Bragg determined that the kitten named Bear, was somewhere under the single story 1,800 square foot home in the heater ducting that ran the length of the house and could only be accessed through an 18 inch crawl space.

The big question was where was the kitten? Bragg called upon his construction background and had the resident turn on the systems fan so air could pass through each vent register, using tissue paper to monitor air flow, they located the exact duct that had both an obstruction, which limited air flow, and smelled like cat!

That was the easy part. Firefighters Alex Torregino and Sam Pacholuk worked their way across the length of the home in the tiny crawl space carefully cutting open sections of the duct work in search of the “catty kitten” who had decided to now go silent. After two hours of crawling, opening and searching the duct work under the house, they successfully located Bear at almost the farthest point from where he had entered the duct work.

“People often joke with us about cats in trees, but actually many, if not most, of our animal rescues are from pipes and sub-surface crawl spaces and areas that animals get themselves trapped in,” said Fire Chief Harold Schapelhouman. “Curiosity did not injure or kill this cat, but the homeowner is going to need to hire a repair person to fix the heater ducting…Bear lived up to his name when it came to this rescue, but the good news is he’s doing just fine now, thanks to the patient and persistent efforts of our firefighters.”