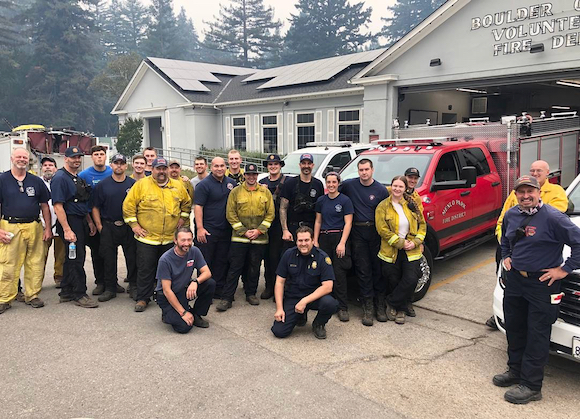 The mostly volunteer firefighters with the Ben Lomond and Boulder Creek Fire Districts know that help is in short supply all over the State. These small bands of dedicated volunteers mixed in with local professional firefighters who live in these tight knit communities, but often work elsewhere in the Bay Area, are used to being on their own and only having to rely on each other, their training and dedication to the communities they serve.

The CZU Lightening Complex Fire has forever changed the landscape, their communities and their lives. Empty streets and homes resemble a ghost town as acrid smoke fills the air like a fog. For the last week they have attempted to prevent their neighbors homes from being snatched by the ever present fire, sometimes successful, sometimes not, including at the cost of their own homes.

“The initial ‘ask’ from Ben Lomond was for a loaner stripped down reserve training fire engine,” Fire Chief Harold Schapelhouman said. “But we quickly realized when we brought it to them that they, and Boulder Creek, needed much, much more. Fire personnel were lying on the concrete floor of the apparatus room in their dirty gear just to get some sleep.

“Within hours we were back with a 6,000 gallon water tanker we occasionally use at our training center along with pallets of water and Gatorade. Within the next 24 hours, we delivered cots and sleeping bags, toiletries, spare radios and fire foam. Now each day we ask them what they need and serve as their logistical supply line so they can focus on the important task of saving their communities. 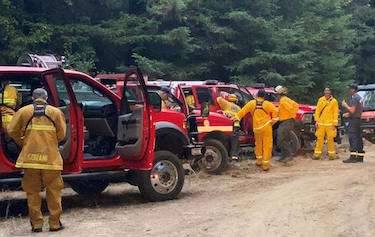 Meanwhile, on the other side of the CZU Fire, another crew from Menlo Fire, along with Woodside, Redwood City and North County Fire, known as Task Force 2287, spend 24-hour shifts working below La Honda, in an area know as the Old Haul Trail, working as part of a quickly organized, first ever, specialized response Task Force of off road smaller 4×4 vehicles (pickup trucks) with light weight hoses, hand tools and smaller pumps and water tanks. They are actively engaging in both fire suppression and creating a fire line to prevent fire progression further into San Mateo County.