Spotted: Plaque commemorating the launch of the internet age at Zott’s 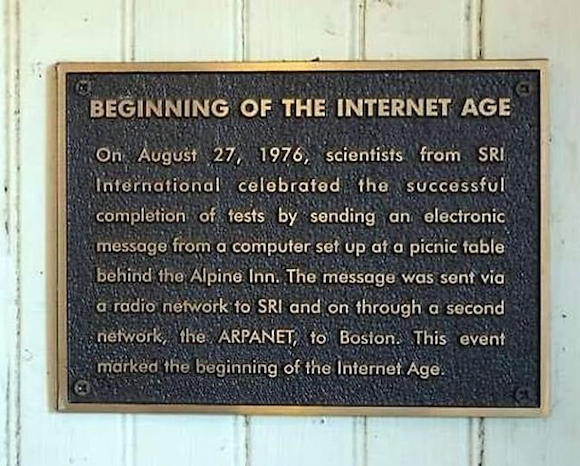 According to Portola Valley Past and Present, on August 27, 1976, researchers from SRI International in Menlo Park chose the Alpine Inn, aka Zott’s, for a special ceremony. The SRI mobile radio laboratory, housed in a large van, pulled up outside the roadhouse one warm summer afternoon.

The scientists placed a computer terminal on one of the picnic tables out behind the building and connected it to the van. Then they proceeded to send a long electronic report…former SRI Computer Science Division Vice-President Don Nielson called this electronic message (not yet called e-mail) “ the first internet transmission”

We had the pleasure of visiting with internet pioneer Elizabeth Fenler before her induction into the Internet Hall of Fame in 2012.