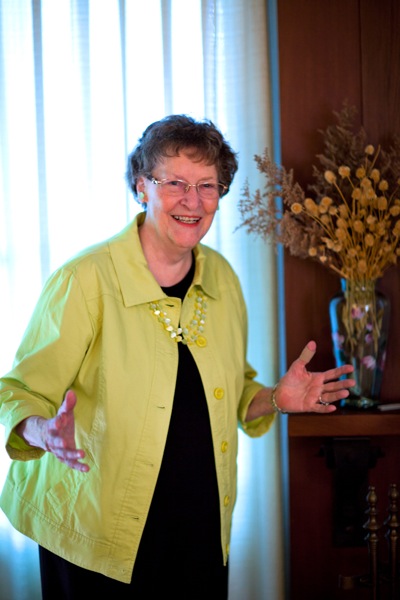 When Elizabeth Feinler — known as Jake, a name her sister gave her in childhood  — was completing high school in Wheeling, West Virginia, she envisioned a career in advertising. Instead, she got a college degree in chemistry. But a chemist, she is not.

Where she made her mark was as an information scientist at SRI International in Menlo Park. For her pioneering work there, Jake, a Menlo Park resident since 1966, was recently inducted into the Internet Hall of Fame along with Vint Cerf, Sir Tim Berners-Lee, Van Jacobson and Steve Crocker. (If you’re not a follower of the web pre-Google and Facebook, that’s quite a stellar class.)

Of her work in the 70s with Dr. Douglas Engelbart, she said: “I knew what we were working on would change the way we communicated but had no idea of just how dramtically.”

Her early networking work was carried out on Host 2 of the Internet, where she managed first the ARPANET, and then the Defense Data Network (DDN) network information centers (NIC) under contract to the Department of Defense. Both of these early networks were the forerunners of today’s Internet.

She served as Principal Investigator for the NIC project from 1974, and was Director for the Network Information Systems Center at SRI  from 1985-89, when she retired.

“ARPANET was the network that would allow scientists to share resources,” she said. “Email, the first killer app, emerged from that work, moving away from resource sharing to office automation as well as the protocol for the underlying rules.”

Jake’s group at SRI managed the Host Naming Registry for the Internet from 1972 until 1989. As part of this effort, she and her group developed the top-level domain naming scheme of .com, .edu, .gov, .mil, .org, and .net, which are still in use today. So instead of going to Network Solutions or GoDaddy as you might today, it was Jake who doled out Internet domain names. 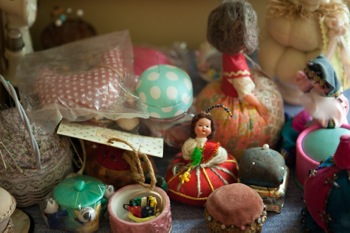 Currently, in addition to “managing” a pin cushion collection that numbers around 350, Jake paints and volunteers at the Computer History Museum.

“I think it’s important to have a repository of the greatest technical revolution of our time,” she said. “The Internet totally changed how we manage information. It’s an amazing experiment that’s no longer an experiment!”

As for that pin collection, she explained: “They’re from all over the world. I was an avid sewer, and the cushions came about when I complained about sticking pins into a tomato. Friends brought me what they thought was an ugly pin cushion from Mexico, and the whole thing kind of exploded with people adding to the collection over the years.”

We must add that all the cushions — excluding those clustered around her sewing machine — are very tidily displayed, as one would expect from an information scientist, who also just happens to exhibit a keen wit.