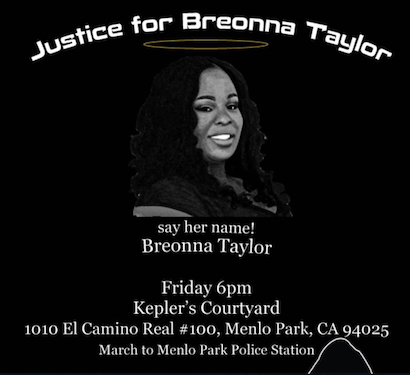 Granny Ruth of the Raging Grannies of the Peninsula emailed that there will be a peaceful rally and march for Breonna Taylor in Menlo Park today, Sept. 25, starting ay 6:00 pm organized by The Hood Squad and Justice Vanguard.

It will start at the courtyard near Kepler’s and proceed to the Menlo Park Police Station.

Breonna Taylor, a 26-year-old woman, was fatally shot by Louisville Metro Police Department (LMPD) officers Jonathan Mattingly, Brett Hankison, and Myles Cosgrove on March 13, 2020. The officers entered her apartment in Louisville, Kentucky, executing a search warrant. The officers knocked before forcing entry, but how the officers announced their identity before forcing entry is in dispute. Taylor’s boyfriend, Kenneth Walker, fired a gun at the officers he believed to be intruders, who fired over 20 shots in turn. Taylor was shot six times in the hallway of her apartment and Mattingly was injured by gunfire.

Hankison was fired by the LMPD on June 23, 2020. On September 15, the city of Louisville agreed to pay Taylor’s family $12 million and reform police practices. On September 23, a state grand jury indicted Hankison not for Taylor’s death, but on three counts of wanton endangerment for endangering a neighbor with his shots. The two other officers involved in the raid were not indicted.