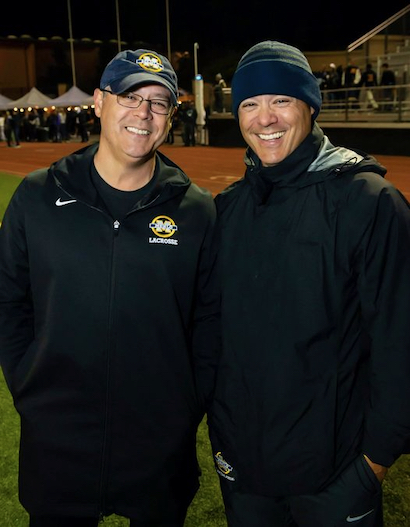 Both Blake and Cort are entering their fourth season with Menlo School where they have established the program as one of the most powerful in Northern California. Since moving to the high-tier West Catholic Athletic League in 2018, Blake’s inaugural season as head coach, Menlo has advanced to the league semifinals both seasons.

Over the past two decades, Blake and Cort have helped develop a generation of young lacrosse players at various camps and clinics around the country, and have been leading outstanding teams at the high school level. In 2011, then with Sacred Heart Prep, Blake was named a US Lacrosse Regional High School Head Coach of the Year.

Blake and Cort played lacrosse for the University at Albany. Blake graduated as the school’s all-time leader in assists (currently fourth all-time), and was team captain in his senior year. Cort went on to set scoring records and earn All-America honors as a two-year captain at UAlbany. He and Blake were later inducted into both school’s Athletic Hall of Fame in 2002, and in 2018 they were recognized as members of the 50th Anniversary Team at UAlbany.

Blake and Cort continued their playing careers with several top post-collegiate club teams worldwide. In the 2002 World Lacrosse Championships in Perth, Australia, Blake and Cort, a captain, played for the inaugural Korean National team. Cort coached Springfield College to consecutive NCAA Div. II National Championship game appearances in 1994 and 1995, won the title in 1994. U.S. Lacrosse awarded Blake and Cort with the Nolan H. Rogers “Keeper of Lacrosse” Award in 2014 for playing in the spirit of the game, with integrity, respect and honor.

The induction ceremony will be held at a date and site to be determined.