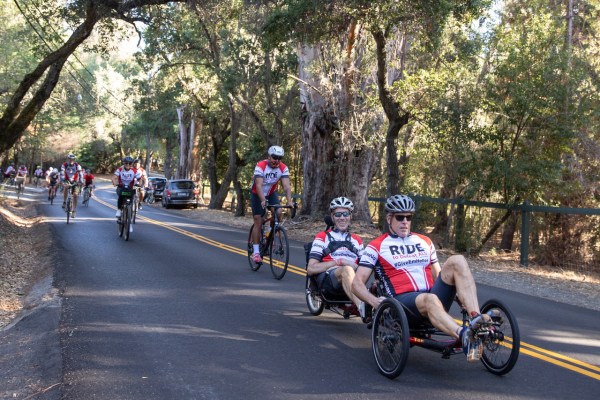 The #GiveEmHeller team that excelled at raising money to find a cure for ALS did get on their bikes this year but with a different look than last year’s Napa Valley Ride to Defeat ALS ride.

This past Saturday, close to 100 supporters cycled 22 miles from Mountain Home Road through Woodside, Portola Valley and Palo Alto in support of Kevin Heller.

“We like so many families were not aware of what it meant to have ALS, more commonly known as Lou Gehrig’s Disease until it happened to our family. Kevin is a fighter, an athlete and a man of faith so as soon as he was diagnosed he started to look for treatments and a cure for ALS. Since his passion was biking, he started a team that would fund raise and Ride to Defeat ALS in Napa Valley in September 2019.

“In less than eight weeks Kevin and his team raised more funds for the Ride to Defeat ALS than any other team in the over 15 year history of the ride. The Golden West Chapter of The ALS Association uses this as one of their primary fund raisers for research and for financial support for the families living with ALS. It costs over $200,000 a year to provide care for someone with ALS and shockingly if you are veteran, like Kevin, you are 50% more likely to be diagnosed with ALS. 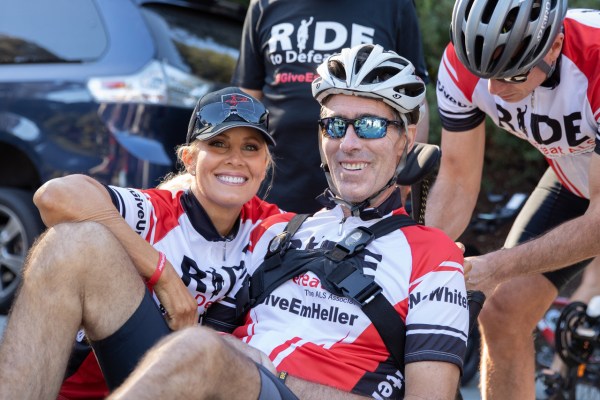 “These were facts that shocked Kevin and threw all of his energy into the Napa Ride, and after the success of last year’s fund raising efforts, Kevin increased his goal to $250,000 dollars.

“Then of course COVID hit, and the ride became a virtual event but once again that did not stop Kevin even though he has a very aggressive form of ALS, and he can no longer talk, eat, stand or use his arms but he is still riding (on a tandem trike bike which is a very impressive sight) and fundraising and staging a ‘live ride,’ or as we are looking at, a peaceful protest against ALS and to raise awareness because we need a cure.”

Information about donating to find a cure for ALS is available at giveemheller.org. And here’s a link to Kevin’s speechwhen accepting the Elevation Award by the ALS Association.