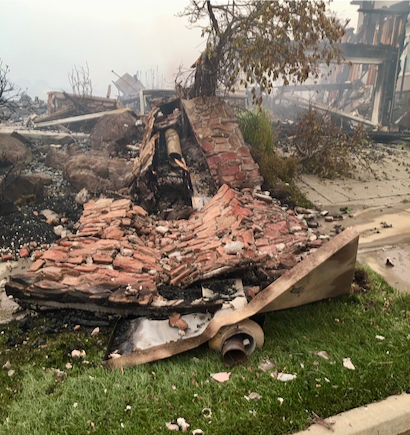 On arrival around 7:00 pm on Sunday, Marra and Strike Team 2275A were re-directed to provide structural protection for a sub-division of large residential structures along Mountain Hawk Drive in Santa Rosa. The Fire Engines spread out along the street and secured water supply lines from local fire hydrants. The crews deployed protective hand lines, abating as many fire hazards as possible as the fire became visible in the mountains across from them facing the Napa side of Santa Rosa. 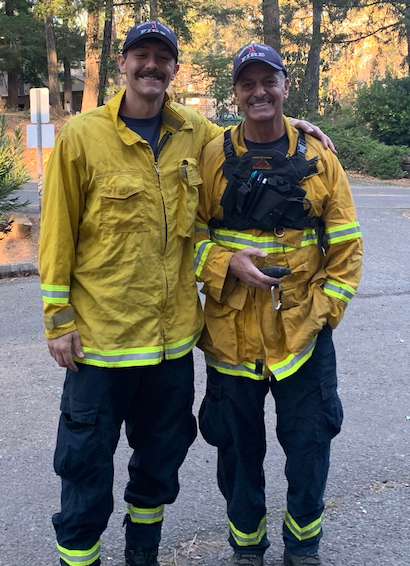 As Marra relayed, the fire front was reportedly six miles long as the winds started to whip up, and they watched it come down the mountain, race across the valley and drop into the gully below them, raining embers across the entire area. With the community evacuated, the firefighters were able to focus on the singular task of actually fighting the fires and extinguishing smaller starts before they could grow to potentially take structures with them.

On foot, Chief Marra was up and down the street all night, checking on the various fire crews, re-aligning priorities, tactics and strategies on the fly. As some of the homes started to burn, crews had to focus on the ones that could be saved and regrettably abandoning their efforts on those that could not, as the deteriorating conditions dictated.

“When I spoke to Chief Marra later on Monday his voice was raspy and he sounded tired but he couldn’t stop praising the firefighters and the stand they had just made,” said Fire Chief Harold Schapelhouman. “In the end he said they had lost 8 homes but directly saved 25 others and the neighborhoods behind them. They were all by themselves for part of the night but reinforcements started to arrive as the night faded into morning and as the winds started to subside.

“He then nonchalantly told me that a chimney on a burnt two-story residential structure fell over and only missed him by about four to five feet. After a pause, I joked that it wouldn’t look good if a certain senior and experienced Chief officer in charge of a national structural collapse team was buried under a collapsed chimney. ‘Good point,’ he countered, and we both chuckled.”