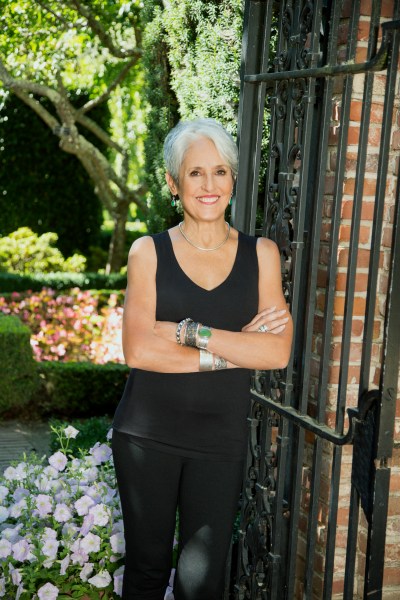 Woodside resident Joan Baez is the recipient of the UNAFF Visionary Award by The United Nations Association Film Festival (UNAFF). The legendary singer, songwriter, musician and activist is being recognized her life-long unwavering commitment to human rights, and her leadership, creativity, persistence, and vision, which inspired several generations to promote peace and a better future for all.

Joan is a key subject featured in the UNAFF Closing Night film The Boys Who Said No!, which profiles the young men and women who actively opposed the military draft in order to end the Vietnam War. A passionate nonviolent activist, Joan was married to David Harris who was a leader in the draft resistance movement. The Boys Who Said No! is offered to stream on the Festival’s closing day of the 11-day online film festival on Sunday, October 25. At the last of the daily panels on zoom that day starting at 6:00pm, Joan  will participate and receive the award. All details can be found at unaff.org.

The awards and accolades given to Joan Baez over the last six decades are unique in reflecting both her legendary talents as a musical artist, and her dedication to human rights. From Grammys and induction to the Rock And Roll Hall Of Fame, to multiple awards from ACLU and Amnesty International, Joan Baez has been justly acknowledged for her timeless music, and the impact she has made to society and the world.

From the beginning, Joan’s life’s work was mirrored in her music. At a point when it was neither safe nor fashionable, Joan put herself on the line countless times. She has been among the first to recognize wrongs, and speak out – and sing out – to inspire change. The struggles she stood behind include the 1960s Civil Rights struggle, the Free Speech movement at UC Berkeley, opposition to the Vietnam war, support for migrant farm workers striking for fair wages, opposition to capital punishment, ending the violence in Northern Ireland in the 1970s, support for gay rights, the nuclear freeze movement, opposition to the Iraq war, many environmental causes, and others. She is cited for having an impact on the transition to a peaceful Chile, Czechoslovakia’s Velvet Revolution, and the new millennium’s protest movement against economic inequality.

The United Nations Association Film Festival, which runs this year from October 15-25,  was founded 23 years ago at Stanford and Palo Alto as a bridge to connect academia and the community through documentary filmmaking focusing on the Universal Declaration of Human Rights. No doubt Joan’s cosmopolitanism was informed through the influence of her father, who was a Stanford alumnus who worked for UNESCO.

She is phenomenal. Magic. Beautiful. And inspired me to never give up.
She deserves the bestest.
All my love..

I second that. An inspiration since my teen years (66 now).

Some of the best news ever!

Congratulations, Joan !! You deserve the best

What else could I add??….She’ s stood for almost everything that was worth standing for…having to do with human rights, peace, non violence and ethical values…and her love for people without boundaries has made its way though an incredible music which has always filled my heart with endless joy. So many things to thank her…I actually love her…( from Montevideo, Uruguay, where I had the amazing chance of attending her concert on March 11th/ 2014 and gave her a hug…)

Joan Baez and David Harris inspired and motivated me to fight,
For peace, for freedom.
They taught me how to build a network of like minded people willing to assist when I needed assistance. They taught me, and they are why I am able to continue the ongoing fight, for right.

Here because “Baez” is trending on Twitter. Glad it’s for a GOOD reason!

You have accomplished so much. You deserve this award. Hope more will come your way.

Brava! So happy she is being honored in this way. She has so consistently spoken out for people who don’t have a voice that is heard.

Without Joan Baez’s beautifully expressed dedication to the radical idea of nonviolent resistence, and a nonviolent attitude even toward the enemies of your own vision of a better world for all, I would not have had the courage going to jail for draft resistence as a twenty year old. Ms Baez can not being thanked enough for the uncountable things she has done. Her musical career and recording catalogue: a timeless world treasure to be discovered again and again. Her voice expresses every moral quality of her life long vision for equality and peace.

I wish the Kennedy Center would honor her, she certainly deserves the accolades. Her credentials are unmatched.

It’s amazing and inspiring to experience this non-violent crusader having trust in her guitar and her voice to cross so many real and symbolic borders , reach out for compassion, empathy and affirmative action in her fellow man.