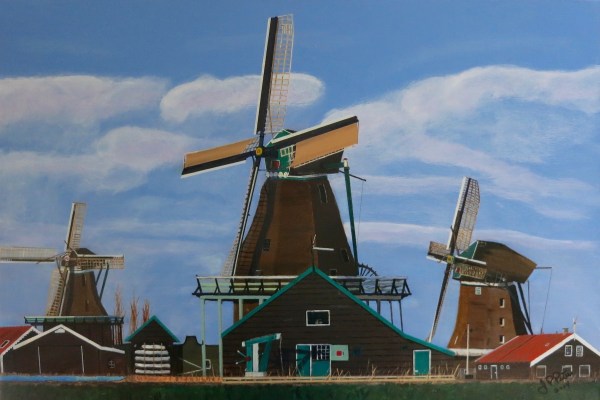 Netherlands Windmills (24×36″, acrylic) is one of the featured artworks in Jerry Peters‘ exhibit Eclectic Works at the Portola Art Gallery. While Jerry is best known for his paintings of old trucks and tractors in nature, this exhibition will include a wide range of artwork from the past 20 years, including paintings from photographs taken on his travels through Europe, Canada, and the U.S.

While there will be no formal reception due to COVID-19 safety precautions, Jerry will be at the gallery on two Thursdays – November 5th and 13th – to answer questions in person. The gallery, located in the Allied Arts Guild (75 Arbor Rd.), is open Monday through Saturday from 11:00 am to 3:00 pm.

Jerry’s love of painting began after retiring from the fire service in 1996. He spent 30 years as a firefighter, the last ten as a Battalion Chief in the Menlo Park Fire Protection District. His career drove his early work in acrylics, which featured fire engines, fire helmets and fire scenes.

He often paints from photographs taken during his travels. His work includes scenes from France, Italy, Germany, Belgium, Egypt, Greece, England and Turkey, as well as from across the U.S. and Canada. Jerry explains that painting from photographs has allowed him to explore new challenges and work on different techniques.

Netherlands Windmills (24×36″, acrylic) is one of the featured artworks in Jerry Peters‘ exhibit Eclectic Works at the Portola Art Gallery.