Good news! The Fremont Park tree will be adorned with lights this year 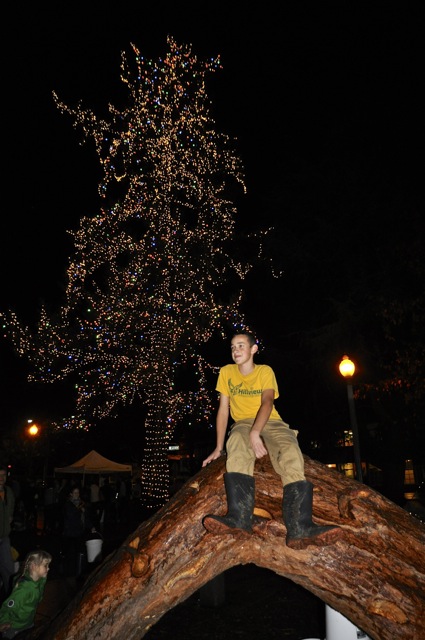 Good news for fans of the holiday tree that’s been lit in Fremont Park for the past eight years. The lights will glow again this year, thanks to a three to one vote by the Menlo Park City Council late this afternoon.

The motion that was made by Council member Ray Mueller and seconded by Council member Catherine Carlton was approved by a vote of three to one. Drew Combs voted in the affirmative while Betsy Nash voted no. Menlo Park Mayor Cecilia Taylor was absent.

“Even when in shelter-in-place is in effect, people are encouraged to go for walks and enjoy the outdoors,” said council member Mueller, speaking in favor of the motion.  “The holiday tree reminds people that they are part of this community. This [tree lighting] is something people look forward to, a tradition for  last eight years.”

Mueller’s motion includes a tree at the Onetta Harris Community Center as well as communication that will let all Menlo Park residents know about the lighted trees.

In a question about the trees that have been lit at Ravenswood and El Camino, Mueller said that those trees are more expensive, and unlike the Fremont Park tree, are mainly viewable by car, so not as pedestrian friendly.

I love Christmas but shouldn’t we consider that $40,000 could be better spent on feeding the hungry and/or housing the homeless? Menlo Park doesn’t have a Christmas Tree Lane! How about a rotating one every year (just so that it would not be annoying to residents to have cars driving down their streets every single year?) For example, on one year it could be a serpentine through the streets between Altschul and Alameda de las Pulgas; the next year it could be driving through Suburban Park; the following year a loop on San Mateo Drive and Wallea Drive. This idea should go to the Menlo Park Planning Commission.

I second Janet’s response. $40k seems very expensive when people are literally going hungry. Maybe they could find a private donor for the trees or post a map of homes that are lit up. Lots of great lower cost, less tone deaf ideas.

Yes, USD 40,000 sounds a bit high, honestly I do not know how that amount is possible… In my opinion it is ok having no Christmas trees eg on El Camino Real as we have those 3 cute little ones, plus decorations, near Kepler’s. In my opinion it is crucial having the one at Fremont Park, even if it is for just 2 weeks. Furthermore if it is about money the city can use different tree decorations which can also be seen during day light instead of lights. Please, Christmas should not complety disappear, there are some other cheaper solutions.

Greetings all. There are two trees being lit. One in Belle Haven, and one in Fremont Park.
We want to make sure there is equity in people from all over the City to be able to walk to the trees with their families.