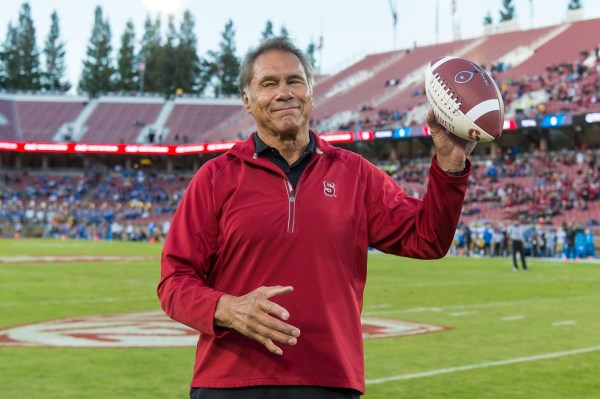 Editor’s note: Today Jim Plunkett, who lives in Atherton, is likely spotted on the Stanford golf course rather than the football field. The Stanford Athletic Department put together a tribute to the 1970 Heisman Trophy winning quarterback, which is excepted below with a focus on the Rose Bowl win over Ohio State on January 1, 1971.

It’s been 50 years since Plunkett collected the Heisman Trophy, emblematic as college football’s finest player, at New York City’s Downtown Athletic Club. The achievement stands tall as one of the greatest in Stanford’s sports history.

Plunkett led the Indians to a thrilling 27-17 upset over previously undefeated Ohio State in the Rose Bowl, capping a 9-3 season that included a Pacific-8 Conference championship and was deemed the best in what was dubbed “The Year of the Quarterback,” with QBs taking five of the top six spots in the Heisman voting.

In late November, Plunkett was in New York to tape a special for the Kodak All-American show when announcer Chris Schenkel pulled him aside to give him the news that he won the Heisman.

“I was happy, but didn’t jump up and down and get all excited,” he wrote in his autobiography.

Plunkett was rushed to the Downtown Athletic Club for a news conference. He returned to New York for the Heisman dinner on December 3, and was awarded the trophy. Plunkett borrowed a suit from tight end Bob Moore. The trophy eventually found its way to the San Jose home of Jim’s mother, Carmen Plunkett.

No. 2 Ohio State, with a 27-1 record for the past three years, was a 13-point favorite to win the Rose Bowl. Coach Woody Hayes felt it was his best team, one that featured six first-team All-Americans. Stanford had one: Plunkett.

The tone was set on the game’s opening drive. Ohio State moved downfield to the Stanford 39, where the drive stalled. Facing a fourth-and-1, the Buckeyes went for it, but Greg Sampson stuffed quarterback Rex Kern for a two-yard loss. Moments later, Stanford’s Eric Cross took the ball on a reverse and ran 41 yards to set up a short touchdown run by Jackie Brown. Ohio State was in for a battle. 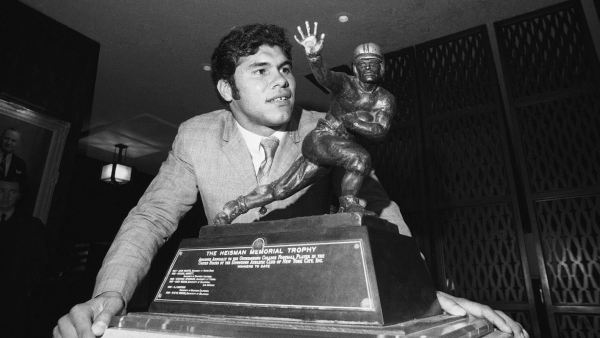 Stanford coach John Ralston and his staff worked overtime to think of wrinkles to throw the Big Ten power off its game. Though Plunkett threw 30 times (completing 20 for 265 yards), he also became a runner, carrying on options and draw plays.

“People asked John why he didn’t do that a lot before then,” Plunkett said. “He said it was a long season and they were saving it for that big game. It paid off big time because it caught them totally by surprise.”

With Ohio State up 17-13 on the strength of two Brockington TD runs, the Buckeyes sought to put Stanford away, gambling on another fourth-and-one, this time at the Stanford 20 on the opening play of the fourth quarter. But linebacker Rod Kadziel hit Brockington head-on for no gain on the game’s pivotal play.

Stanford followed with a drive of its own, but found itself facing 3rd-and-15 at the Buckeyes’ 37. Moore often stayed to block on passing downs, but as they broke the huddle, Plunkett told Moore to go out.

Plunkett dropped back, but was forced to scramble to his right by a heavy rush. On the run, he spotted Moore downfield and threw. Moore leaped between two defenders along the sideline to make a spectacular catch at the 2 for a 35-yard gain. It set up a Jackie Brown 1-yard TD run for the lead, culminating an 80-yard drive in which Plunkett went 5-for-5 passing.

Having to play catchup, Ohio State was forced uncharacteristically to the air, playing into Stanford’s hands. Safety Jack Schultz intercepted a Kern pass to set up the clinching score, a 10-yard pass from Plunkett to Randy Vataha with 8:18 left and Stanford pulled out a remarkable victory before 103,389 at the Rose Bowl.

“Maybe some guys would be happy just to get here,” said Plunkett, the game’s Most Valuable Player, in the locker room afterward. “But we were planning on winning, too.”

A Stanford grad who went on to play in the NFL

As great as a Heisman Trophy was for Jim Plunkett and all of his football accomplishments, a Stanford degree may have been the biggest in the eyes of his father, William Gutierrez Plunkett, who passed away before Jim earned either of those honors. Plunkett, a native of East San Jose, was the first in his family to graduate from college.

Plunkett went on to become the No. 1 NFL Draft pick by the New England Patriots, earning Rookie of the Year honors. He played 16 NFL seasons, with the Patriots, San Francisco 49ers, and Oakland/Los Angeles Raiders, the franchise he led to two Super Bowl titles, and was named MVP of Super Bowl XV in 1982.

In 1991, Plunkett’s No. 16 became the second number retired in Stanford history. He is a member of the National Football Foundation College Football Hall of Fame and the Stanford Athletic Hall of Fame.

“The trophy eventually found its way to the San Jose home of Jim’s mother, Carmen Plunkett.”

I witnessed this as it was on Jim’s mom’s fireplace mantle for many years!