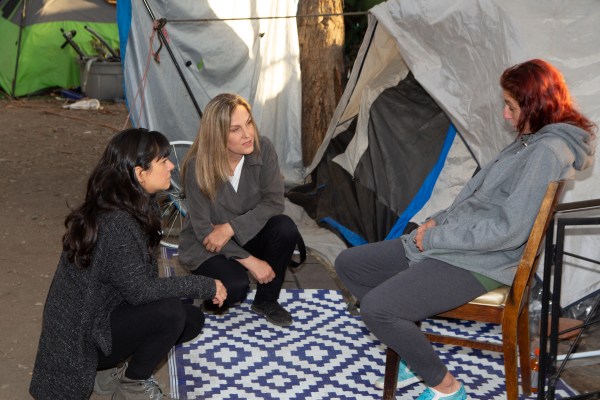 About five years ago, Laura Ferro was watching the television news and saw a segment about a pregnant homeless woman in San Francisco who was facing the prospect of giving birth at a bus stop. The woman’s desperate circumstance troubled Ferro, a filmmaker living comfortably in Menlo Park — who happened at the time to be expecting a child, too.

“I didn’t have a connection to the homeless community until that point,” she says.

That unlikely moment was the inspiration for a documentary that Ferro has been working on in the Bay Area for the past three years, Pregnant on the Streets. The expectant mothers, who are almost invisible on the fringes in an area brimming with wealth, are shown as they experience the difficulties of life on the street, either navigating social service agencies or lost in a fog of mental health issues and drugs, Ferro says.

A native of Argentina who came to the U.S. eight years ago, Ferro connected with Tony Gapastione, founder of the filmmaking nonprofit Bravemaker, and told him about her project. He put her in touch with Pastor Dave Shearin and his wife Shawn of Street Life Ministries, a Redwood City-based organization with an extensive meal and outreach program to the homeless community.

Shawn Shearin provided the entrée to Ferro to go to homeless camps and find pregnant women willing to tell their stories. At an earlier period in her life, Shawn had been homeless and pregnant too (in Seattle), but was able to get into a shelter and turned her life around. Through the Street Life ministry, Shawn already had a relationship with most of the women she introduced Ferro to, “And I was able to explain what we were doing and they were very open to it.”

The documentary, a color film which will be 30 to 40 minutes long, follows three homeless women over three years, from the time when they were pregnant until after their babies were born. One of the women was determined to stop using drugs for the sake of her child, Ferro says. She accepted help that has enabled her to get a job and today is providing for her son. Another woman, unfortunately, is back on the street and had to surrender her child. Ferro says the women she interviewed appreciated the opportunity to be heard and that anyone would think their stories are important.

About 60 percent of the documentary has been completed, and Ferro plans to do more interviews with experts on homelessness including doctors and social services providers. She has established a GoFundMe account  to raise the estimated $66,000 needed for completion and is also seeking other individual and organizational supporters. Bravemaker, which is a 501(c)( 3) organization, is the fiscal sponsor to receive donations.

Ferro does videos for corporate clients — to get an idea about her work, visit Rebelmonk — but Pregnant on the Streets is her first documentary. After it’s completed, she plans to submit it to film festivals and, once Covid-19 allows, to screen the film for local audiences. She hopes people who see her video will be encouraged to reach out and build relationships with homeless people rather than just walk on by.

“Many people,” she says, “don’t want to look. Through the documentary, we have a tool to show that there are women like us that have the same values. They want to do what’s best for the child and fight for them.”

This article originally appeared in the December issue of Climate; used with permission.