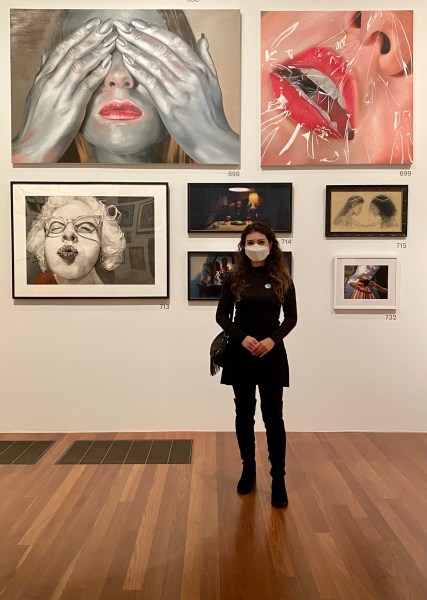 When Menlo Park resident Arianna Tamaddon headed east to attend Wesleyan University it was with the idea of taking pre-med classes and eventually becoming a physician. But then she met Tula Telfair, a landscape oil painter and professor.

“Both of my parents are talented artists, and I’d taken AP Art at Menlo, but I’d done no oil paining until I was at college,” she recalls.

After graduating, she continued to think she’d pursue a career in science, but decided to continue painting for a year. And then another year.

Arianna’s efforts were rewarded last year when two of her painting were selected as part of the DeYoung Open, where works of art were hung “salon-style,” installed edge to edge, floor to ceiling. And both of her exhibited works, numbers 698 and 699 (top images in the photo), were purchased. [Note: Originally scheduled to run through January 2021, the DeYoung Open closed on Jan. 6 due to COVID-19 restrictions.]

“I applied thinking, ‘this won’t happen,’ so it was a very surreal moment when I was notified that my paintings were chosen,” she says.

Ariana explains that her style is photo realism and that she paints from her own self portraits.

“As a mentor, Tula was great at seeing my personality and pointing me to what my style might be,” she recalls. “I did have a strong interest in photography already and started doing photo realism of fruits and things that looked pretty.

“But she pushed me beyond that, to work subconsciously about surfaces and feminism and what it means to be female.”

There is a time lapse of how a photo realistic painting is created on Ariana’s Instagram page.

Based in San Francisco, Ariana is back in Menlo Park during stay-at-home orders and “trying to get as much done as possible.”

“My next goal is to have a solo show somewhere in the Bay Area,” she says.