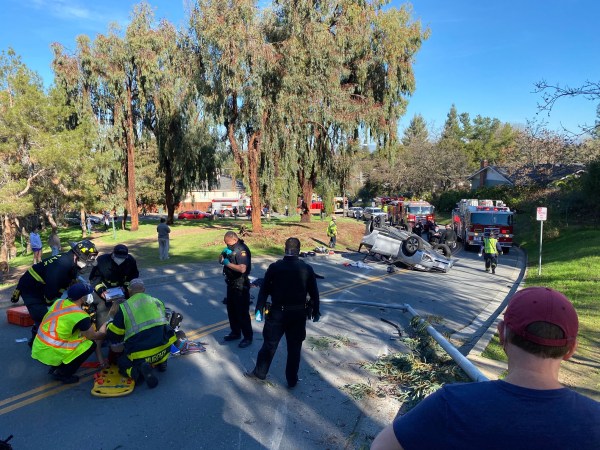 Three teens were involved in an accident on Saturday, January 16, when their SUV apparently struck a light pole and then rolled over on Valparaiso near the foot of Sharon Hills Park.

Two off them were trapped inside the vehicle, and a third was ejected. The upside down vehicle was stabilized, and the Jaws of Life were used to open it up so the two people inside could safely be removed from the car. All three were transported to Stanford Hospital.

Reported Menlo Fire Chief Harold Schapelhouman: “This small section of Valparaiso runs between Altschul Avenue and Hallmark Circle through what is known as Sharon Hills Park. It is a significantly steep section of road that  winds about with some pedestrian traffic at times.

“The vehicle appears to have been coming down the hill, striking the light standard (pole) and then rolling over. Fire Station 4 is located just down the street and arrived on-scene two minutes after being dispatched.

“These three individuals all sustained significant injuries and anytime our Firefighter/Paramedics ride to the hospital with a patient, it speaks to the severity of the emergency and need to provide the highest and most consistent level of care possible, in order to try and save a life”.