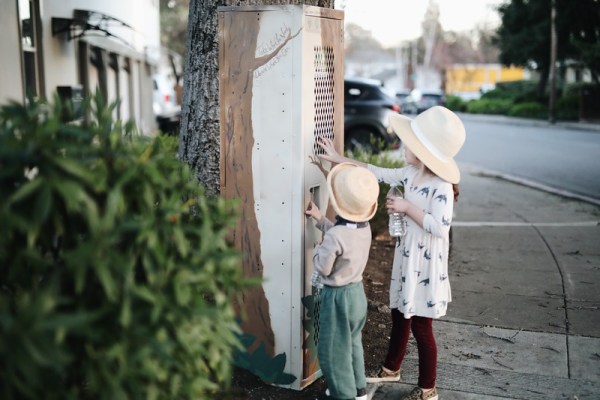 What started as a theft has been transformed into a free food locker for hungry people thanks to Menlo Park resident Xan Craven. 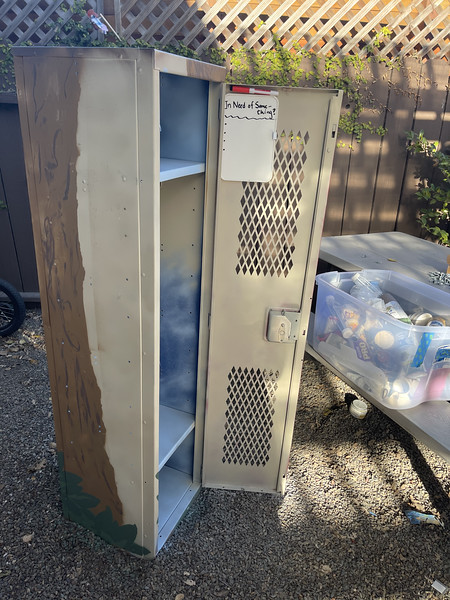 She explains: “Last week my husband texted me and said the food and drinks he keeps in our carport to take with him on his way to the hospital (he is a Neuro-critical Care Fellow at Stanford) weren’t there anymore and asked if I had moved them. I hadn’t moved them, and so I checked our little security camera footage and saw that some guy on a bike and rode into our carport while I was picking up my daughter from her preschool pod, and stole the food and drinks.”

Now anxious and not feeling safe being at home with her kids, Xan posted the experience on some neighborhood groups. “A lot of people were kind and understanding, but other people had different things to say. Some were grumpy and said I shouldn’t be mad because the guy probably needed the food, and others said it wasn’t smart to keep my food out where just anyone could get to it, then others kindly mentioned that maybe I should be ok that the food being taken and hopefully it went to someone who needed it for their family.”

Xan, a professional photographer whose career is temporally on hold due mothering duties, says she thought long and hard about how her husband works 12-14 hours days in the ICU, often sitting with people who are dying as their families can’t be with them due to COVID-19 restrictions. She realized that even if her husband knew that the guy he was treating had stolen the food, he would treat him anyway. 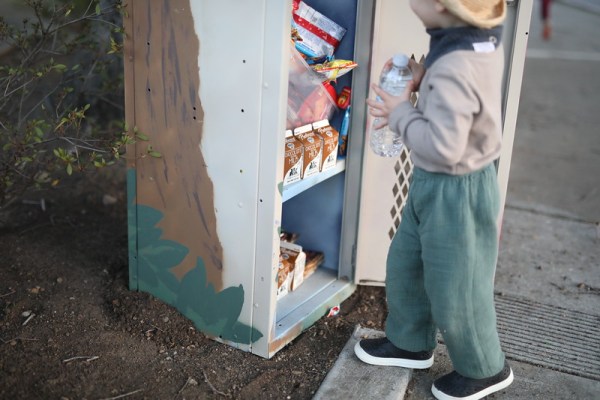 “I decided to treat the situation with charity instead of fear and anger,” she says, “and to take the advice of some of the commenters. I went to my carport and grabbed a large storage bin and brought it in my house. I got my 2 year old and 4 year old and we went to our cupboard where we kept our pantry items and we went through all the snacks we hadn’t eaten and put them all in the storage bin. Then I wrote in big letters with a permanent marker “NEIGHBORHOOD FREE FOOD BIN’ ‘Donate if you can, Take what you need.’ 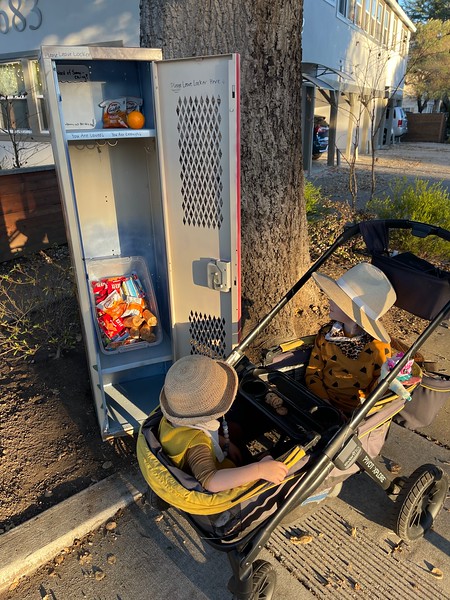 “I was flooded with kind comments and supportive people, not only cheering me on, but asking if they could contribute to the food bin as well! I was thrilled to see the beautiful culmination of charity by a humanity I had just earlier felt betrayed by.”

Word also got around that the Craven’s bin was consistently over flowing and someone saw that a local was giving away an old locker for free and coordinated with the locker owner to drop it off at the corner where the free food bin was.

“I picked up the locker that was bright red and blue, stuck it on our little skateboard and brought it to our patio,” Xan says. “I got some leftover paint we had, and painted it cream with some trees and leaves on it, hoping that blending it in a little more with the surroundings, mitigating any irritated feelings by neighbors unhappy with its presence.

“That evening my kids and I rolled the locker back to the corner [located at the intersection of Curtis Street and Live Oak Avenue], and placed some new food in it, graciously donated by my daughter’s sweet preschool teacher who had heard about our free food endeavor. Hopefully the locker will continue to hold many items for those in need during these difficult times.”

What a great idea. I’ll try and pass this story on to people in my community. I live on the coast and we have homeless and hungry people in the area. This a an idea that could and should grow. Either way I’ll be by tomorrow and drop some things off in your food locker. Curtis St and Live Oak Ave M.P.

It is impossible to satisfy everyone, that is life. People being grumpy and toxic are not satisfied with themselves. They are the ones who should learn to behave well. The idea is very kind, thank you, hopefully those in need will accept this free food locker.