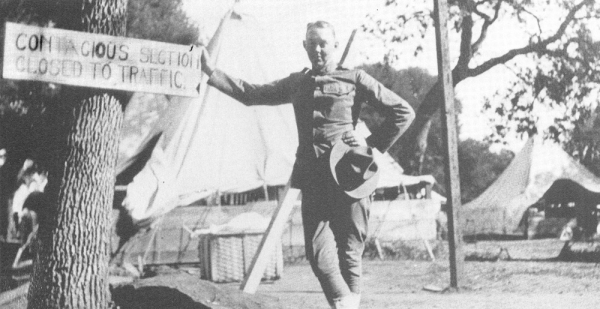 Editor’s note: One year ago today, a Bay Area resident flew in from Wuhan, China, whose residents were in the throes of an outbreak caused by the coronovirus. A week later he tested positive for COVID-19, the first known case in the Bay Area. Over 100 years ago, the Menlo Park area fighting the Spanish flu.

A new killer influenza (Spanish flu) struck Camp Fremont (occupying most of today’s Menlo Park) in the fall of 1918. As Barbara Wilcox reports in her 2016 book, World War I Army Training by San Francisco Bay, during a six-week period, roughly 8,000 Camp Fremont troops (roughly a quarter of the total at the camp) were treated for respiratory diseases, 2,418 of whom were admitted to the base hospital (where the Menlo Park VA hospital is now located). Pneumonia was diagnosed in 408 cases and, of these, 147 died.

Perlie Melvin Phinney, a 30-year old soldier at Camp Fremont, wrote 16 letters to his parents between October 3 and November 14, 1918, describing his life at the camp and, in particular, the influence of the influenza. His granddaughter has recently transcribed these letters and has made them available to the Menlo Park Historical Association: A Firsthand Account of the Spanish Influenza at Camp Fremont in 1918 is available online.

A very interesting read. Thank you for posting this