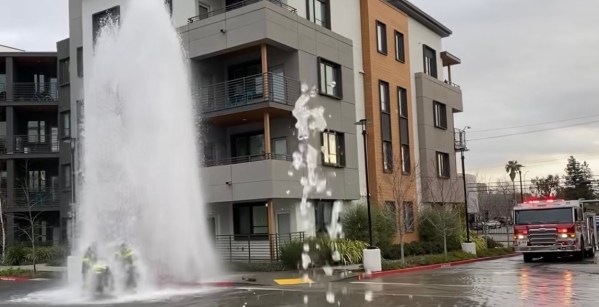 Captain Rob Johnson on Menlo Engine 77 reported “that a FedEx delivery truck had accidently sheared off a fire hydrant in front of the complex and water, the height of the three story building, was quickly flooding the local area.”

Despite repeated efforts by the Firefighters to gain access to the street shut-off valve, which was located next to the hydrant, the water pressure and debris pummeled them and thwarted their repeated attempts to shut it off. As thousands of gallons of water poured out, Captain Johnson requested help from the City of Menlo Park’s Water Department. Upon their arrival, another shut-off valve was located, but that valve also shut-off water to the entire housing complex. Despite taking almost an hour as the system slowly depressurized, Firefighters waited for the right moment to successfully shut down the sheared off fire hydrant and then restore water pressure back to the complex.

“If you don’t like being cold and wet at times, then don’t join the Fire Service, because we contend with both all the time!” said Fire Chief Harold Schapelhouman. “Fire hydrants specifically can present a challenge when they get hit or sheared off…It’s always impressive to see water shooting out of the ground like this, but trust me, those firefighters were pouring the water out of their boots before returning to the station and they were soaked to their core.”.