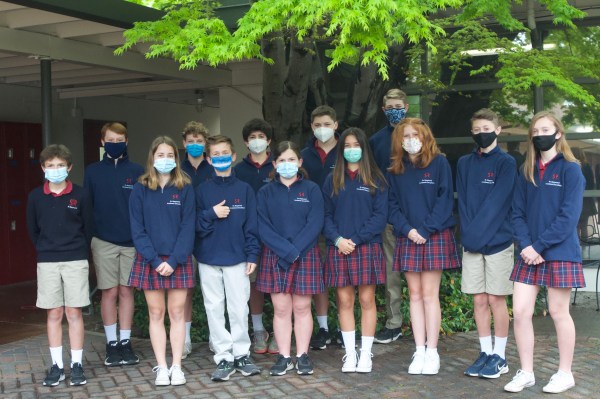 The competition was virtual this year, making it even more challenging than in past years. The students were only able to practice all together during the last two weeks leading up to the competition. In years past, St. Raymond students met before school and many times on weekends to study together.

The students had to take the different parts of the test in new ways, using Google sheets and a Google survey and a platform called Quiziz. Instead of all the schools gathering at one school and competing in person, each team took the test at their own school. St. Raymond utilized their gym with desks six feet apart while all connected on Zoom.

This year’s Academic Decathlon team was helped and encouraged by team members from last year, including Bella Svanberg, Patrick Boyd, Kate Ward, and Kara Merkert, who stepped forward and worked to organize the team and keep them motivated. Led by Roxana Dommer, many parents were instrumental in helping to make the competition possible for the students.

Congratulations to the St. Raymond team! This was certainly a challenge unlike any other this year and included all the work, with none of the fun (team bonding activities like movies or bowling). Your positive attitudes with never a moment of complaint were inspiring.