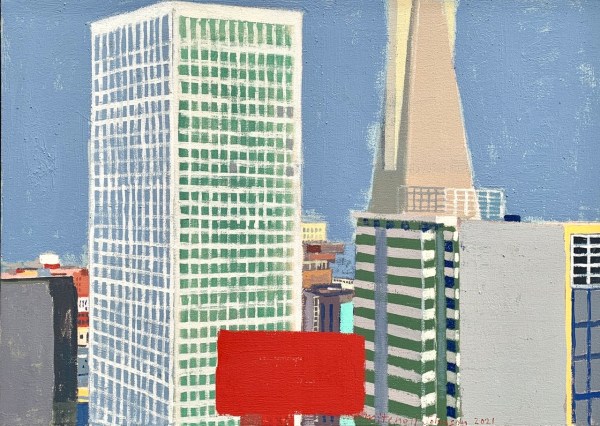 Update: The exhibit has been extended through July 2.

In what Menlo Park-based artist Mitchell Johnson describes as a “major exhibit,” the Pamela Walsh Gallery in Palo Alto is presenting Color Continuum: Selected Works 1988-2021 from May 15 to June 26. The opening reception is from 4:00 to 6:00 pm on Saturday, May 15. The Gallery is located at 540 Ramona St.

“There are a lot of earlier smaller paintings to build the context of how I got to the big paintings,” Mitchell explains. “Some are borrowed from private collections. Some are going to museums. And some are for sale.” 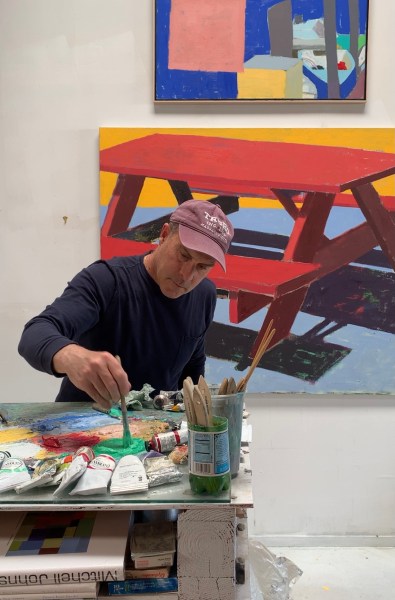 Mitchell’s formative years as a painter were shaped at Parsons where he received his MFA in 1990. At the time, Parsons was still brimming with many of Hans Hofmann’s former students: Paul Resika, Larry Rivers, Jane Freilicher, Leland Bell, Neil Blaine and Robert DeNiro, Sr. New York was fertile ground for a young painter, and Mitchell learned from all of these artists.

Between Parsons, the NY museums, and working small jobs for Frank Stella and Sol LeWitt, Mitchell began to develop his artistic practice and find his voice as a painter. His early work ranges from purely abstract compositions and figures to representational landscapes steeped in European traditions.

In the fall of 1990, Mitchell’s life took a dramatic change of course when he was offered a job as studio assistant to Sam Francis in Palo Alto. He left New York for the West Coast and discovered the seductive light of California. The change of scenery was immediately evident in his work. In the 90s, Mitchell became known for expressionistic, painterly landscapes of California and bucolic scenes of Europe.

In the early 2000s, Mitchell’s work went through another distinct change as his compositions became more distilled and abstracted. He continually emphasizes the watershed moment when he visited a 2005 Josef Albers exhibition at the Giorgio Morandi museum in Bologna, which crystallized concepts he was already experimenting with in his own work.

Brenda Danilowitz, the chief curator at the Albers Foundation summarized it best: “[Mitchell] recognized that something remarkable occurred when these two unlikely comrades in art faced one another. The upshot resonates in Johnson’s work of the past two decades: precisely and meticulously arranged color and form play off each other in startling and lambent ways.” As an artist who was already excited by the possibilities inherent in color and form, he found lasting inspiration in the juxtaposition of these artists who were masters at both.

He began to intermingle large, geometric shapes and flat areas of color into his cityscapes of New York and San Francisco, and later his beach landscapes in Cape Cod. Using familiar views as scaffolding, he examined the interplay between the context of color—variety and how one hue relates to another—and the context of form.

Today, he works in a large, light-filled studio that allows him to deepen his exploration of colors in natural light and work on large-scale canvases. His newest paintings are bright, bold, representational images of Cape Cod, New York, California, Europe and colorful, geometric abstractions.

Parsons…Great school. My wife’s son graduates tomorrow with a degree in Interior Design.
four years and almost straight A’s I spent 8 years in San Francisco and the Bay Area and our first house was in Western Menlo Park just below the Stanford golf club,. We loved it but got transfered back East. My wife and stepson are both artists and we all like your work and follow it in the Sunday Times magazine. One day we will introduce you to their work. Peter Hodge