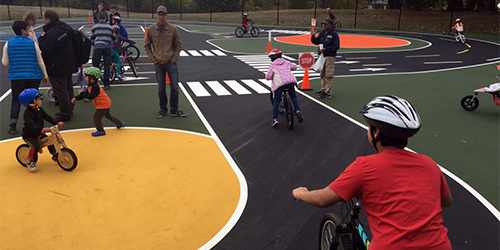 A traffic garden is a space designed with a network of small-scaled streets and traffic features such as traffic lights, stop signs, bike paths, etc. They create a safe environment free of motor vehicles for children to practice their walking and rolling skills and learn about road safety. They are great assets in providing realistic bike and pedestrian education.

Some traffic gardens are designed to be temporary installations in parking lots or playgrounds, and some are permanent structures with asphalt streets and concrete curbs–some are literally miniature towns with small buildings! Traffic gardens can also include a classroom, a bike shed, restrooms and a picnic area. Traffic gardens can be used by families during weekends or during school field trips to teach pedestrian and bicycle safety, bike skills and bike maintenance.

Traffic gardens exist throughout the world, mostly in Europe and North America. The concept was particularly popular in Denmark and Netherlands in the 1950s to provide hand-on bicycle training to children. Within the last decade, traffic gardens gained in popularity in the United States, mostly concentrated in Ohio and on the East Coast. About 250 permanent traffic gardens have been identified around the world.

Complete this brief survey to let us know you would like to see a traffic garden built here in the Silicon Valley.

To know more about traffic gardens:

From Menlo Updates; used with permission

Thank you for providing this survey. Traffic Gardens are a key enabler to train children how to ride safely.