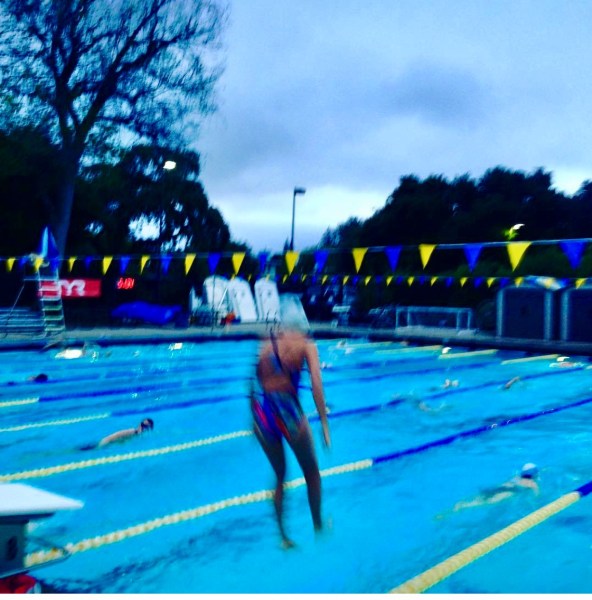 The first pool I went to was a bus ride away from my house. I was six but I still know the smell of it—and I carry with me the shame I felt for not knowing yet how to swim. At home, I was smaller than everyone else, but I was the biggest kid on that bus to my first swim lesson, too old for the songs they were singing. I was angry at my mother for signing me up for swim school with babies without asking me and I went without knowing why.

Of the lesson itself, I remember this: the smell of chlorine, the sound of a whistle, and my surprise at finding the water clear and colorless, not blue as the tiles. There was no instruction—that would come decades later. The instructor would swing the children out onto the water, count to three, and drop them.

My name was called with the others and I fell flailing into the deep end. Before I knew the words for it, my legs were fluttering, my arms were sculling, and I had swallowed a gallon of water. Hugging the wall, I avoided the gaze of the man who had thrown me into the pool by ducking my head beneath the surface to that echo chamber that was underwater and private, where his whistle warbled a weak warning. I made no friends that day—that, too, would come decades later—but I was hooked on the weightless wet embrace of water.

Now, 52 years later, I am driving to the pool at dawn on a mild summer day. I’d know the way to it with my eyes closed—down Valparaiso, across El Camino, right on Laurel. I can smell it like I could smell it then. Ten minutes and I’m standing in it, listening to instructions.

I still carry the shame, only now it’s for being mad at my mom all those years ago—and taking for granted our pool, our masters team, our extraordinary coaches, and my swimming buddies—the best I ever had. For the past year, I’ve been a lone swimmer in a lane I reserved at midnight a week before.

I have no other way of telling what I’ve missed, what I thought was lost forever in 2020. And the near-miracle of its return next week.

Menlo Park resident Donia Bijan is an author and former chef as well as a passionate swimmer.

Unfortunately, pool management is abdicating their responsibility to keep the community safe. There’s a sign saying masks are required to use the facility, but no one confirms or asks about vaccination status, so the pool could easily become a super-spreader event, especially since children using the facility cannot yet be vaccinated. The county has yet to achieve herd immunity, and with some people determined to avoid vaccination, the evolution of virus variants is inevitable. The only question is whether early re-openings with no vaccine requirements will result in new surges. Vaccine protection isn’t 100%, and pretending that it is will only result in more tragedies. People shouldn’t have a right to spread communicable disease, and asking about vaccination status isn’t a privacy violation (according to the California Department of Public Health.) Please, businesses, enforce vaccination requirements, or at least require patrons to wear masks and maintain social distancing. Pretending the pandemic is over is a sure recipe for more disease and death.
Pool management could enforce vaccine restrictions for adult programs and keep children and adults separated, but they don’t want to bother; they’d rather have everyone sign a waiver, saying they cannot be held responsible, thus abdicating their responsibility.
Yes, it’s nice to see familiar faces again, and great to be back in the pool. I only wish we could do it more safely.