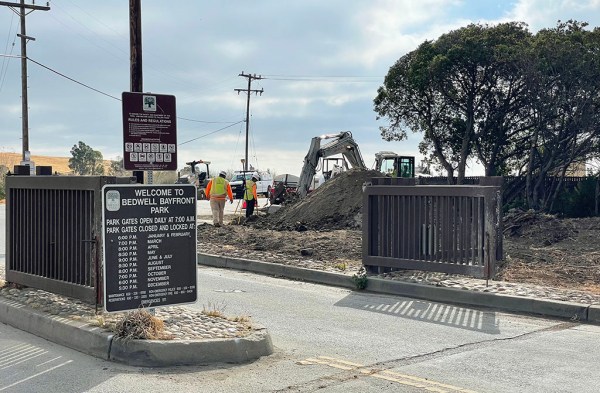 If you enjoy walking or biking in Bedwell Bayfront Park, you may have noticed the reappearance of construction crews. There are three different construction projects taking place in and around the park right now, and the work is being carefully choreographed for efficiency.

When all of the work is completed, most likely in 2023, visitors will see restored marsh areas surrounding the park and an enlarged pond area for ducks and shorebirds. There will also be more direct paths to the park for Belle Haven neighborhood residents, and the installation of culverts to prevent flooding in the area north of U.S. Highway 101 between Marsh and Woodside roads.

Here’s a recap of the three current construction projects, and a preview of a fourth project set to begin next year.

The construction now taking place near the Bedwell entrance involves the Bayfront Canal and Atherton Channel. They converge by the border between Redwood City and Menlo Park, and then empty into the bay through a tide-control structure near the park. More than 40 times in the last 70 years, high tides prevented stormwater runoff from draining into the bay, flooding mobile homes and businesses.

Four entities – Menlo Park, Redwood City, Atherton and San Mateo County – agreed to work together to solve the problem through the county’s newly formed flood and sea-level rise resiliency district. The district, known as OneShoreline, will install underground box culverts near the Bedwell entrance. During high tides, the culverts will direct excess stormwater runoff into ponds managed by the South Bay Salt Pond Restoration Project. The extra water will drain into the bay from the salt ponds after the tide goes out. 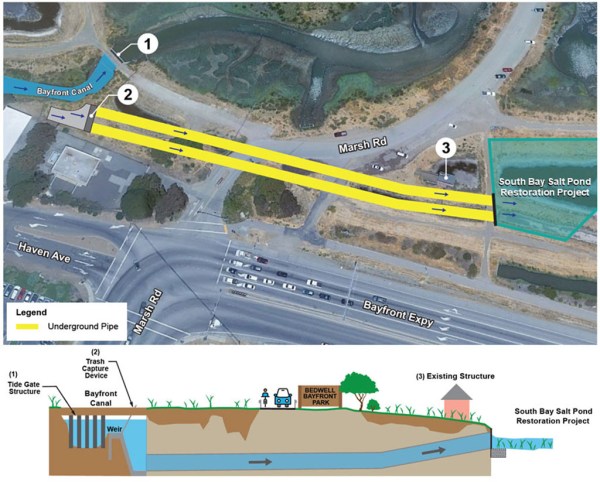 Colin Martorana, associate project manager for OneShoreline, said the work being done right now will involve a slight realignment of the entrance to the park from Marsh Road so that crews can excavate the site and install the box culverts.

Later this summer, crews will install the structure that will drive the water into the salt pond, and will complete the remaining excavation and the construction of a tide gate.

Martorana said the project’s major construction must be completed by January 2022, with additional clean-up and close-out work continuing until approximately April 2022. This is OneShoreline’s first big project, and Martorana said his team is eager to show that the district can “bring good value to the communities we serve.”

The marsh restoration work began in 2018 with the goal of creating 295 acres of tidal marsh east of Bedwell, and expanding the shallow water habitat for ducks and shorebirds to 67 acres between the park and Bayfront Expressway.

The work involves three kinds of restoration efforts, said Dave Halsing, executive project manager of the South Bay Salt Pond Restoration Project. The first is the tidal marsh area that will occupy the R4 zone on the accompanying map. 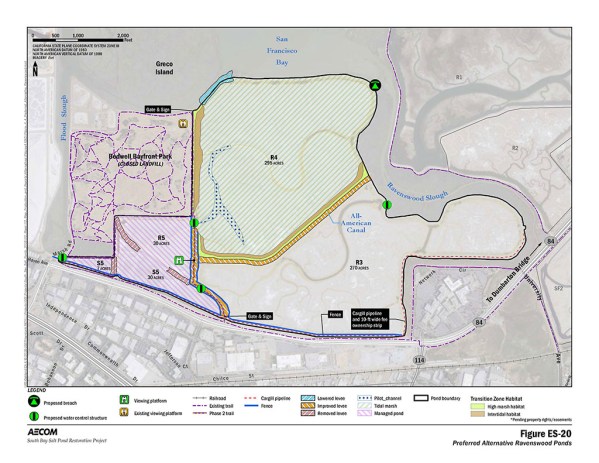 The second restoration will be the water habitat area for birds in the R5 and S5 zones. The third restoration will ensure that the “moonscape” area, known as the salt panne, in the R3 zone remains usable for the Western snowy plovers that nest there.

Within two years, the project will open a new gate on the Bay Trail near the intersection of Chilco Street and the expressway. Visitors using the gate can walk toward Bedwell Park, getting a view of all three restoration areas. Benches and informational signs are planned for the viewing area. The new trail section will connect with the south end of the park.

The new gate and viewing area most likely won’t be available to the public until 2023, Halsing said. “We don’t want to surface the trail and put in the benches until everything else is done,” he said.

This summer, crews will continue to build up the levees for flood control, install water-control structures and complete the transition zone between the park and the tidal marsh area.

The steel structure for the pedestrian and bike bridge that spans Bayfront Expressway was put in place in during the spring, and crews are now working to install the cement surface and railings. 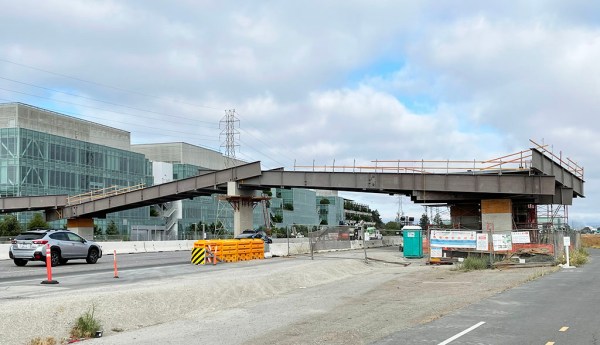 This will make it easier for Belle Haven neighborhood residents to get to the Bay Trail. And because the bridge terminates on the trail near where the second entrance to Bedwell Park will be located, it will make the trek to the park much shorter, too.

The bridge and the park area along Chilco Street are expected to open by the end of this year.

A fourth project planned for late 2022

The City of Menlo Park will begin work to reconfigure and improve the entrance to Bedwell Park in late 2022, after the culvert work near the entrance has been completed. 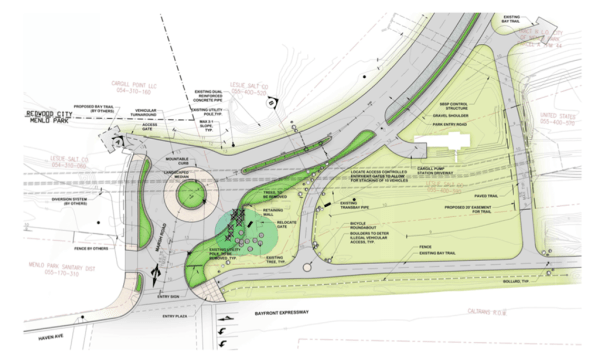 The city’s project will include:

Susan Erhart is editor of Belle Haven News where this post originally appeared; used with permission

Wondering when the improvements for park users will be started, as approved in the 2017 Master Plan?