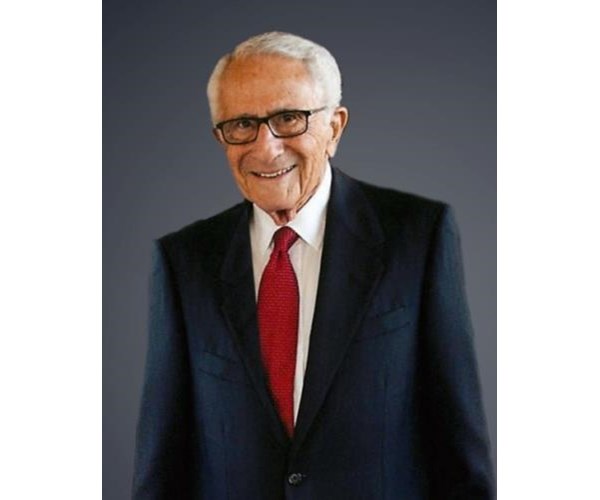 Long-time Atherton resident Mervin G. Morris, founder of Mervyn’s Stores and philanthropist, passed away on August 24, 2021, at the age of 101.

Merv lived the quintessential American Dream. He was born in San Francisco on July 4, 1920, to Fannie and Harry Morris. He was a third generation Californian. His great grandparents ran a store in the Mother Lode during the Gold Rush.

Merv grew up in the small Central Valley farming town of Delano, along with his sisters Bertille and Jacqueline. His parents ran a local retail store called Morris’, and Merv learned the retail business early on by working as a sales clerk. After graduating from Delano High School in 1938, he went on to attend one semester at the University of California, Berkeley, before being called home.

Merv remained in Delano helping with the family business until he enlisted in the military during World War II. He was stationed domestically during the war, running an Army post exchange based in Arkansas. Merv was discharged with the rank of Captain.

Merv returned home after the war and rejoined his parents in the family business. He eventually decided he needed to strike out on his own and relocated to San Francisco. On July 29, 1949, at the age of 29, Merv opened the first Mervyn’s in San Lorenzo, California. 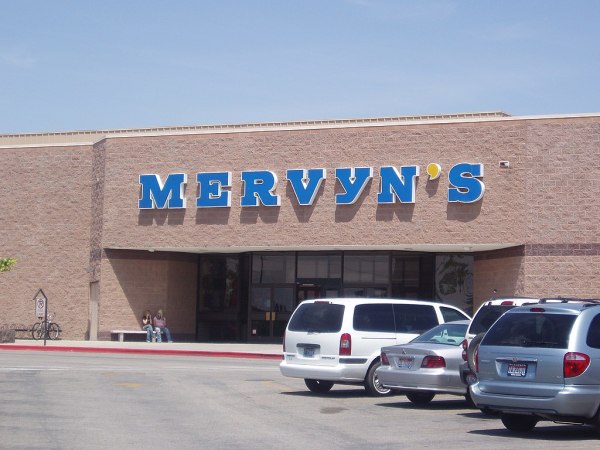 While he was in the early years of building his business, Merv met Roslyn Grossman, a young woman from Napa, on a blind date. They married in San Francisco in September of 1950. They soon welcomed four children into their family: Diane, Jeff, and twins, John and Jim.

From 1949 to 1960, Merv continued to grow the San Lorenzo Mervyn’s store, expanding multiple times beyond its original location and solidifying the Mervyn’s way. He then set his sights on additional locations. Mervyn’s celebrated its first day as a public company in the spring of 1971. With the additional funds from the public offering, Merv was able to rapidly expand Mervyn’s.

Mervyn’s was sold to Dayton Hudson (now Target) in January 1978. Merv remained Chairman and Chief Executive Officer of the company until 1979, by which point there were approximately 75 Mervyn’s stores.

During his 30-year tenure as founder and CEO of Mervyn’s, Merv built a reputation of having both a keen business mind and a deep sense of loyalty. His employees and customers loved Mervyn’s, and Merv returned the feelings in spades. He was respected and beloved. He was an innovative leader, smartly choosing his store sites and understanding the consumers of the post-War boom years. In recognition of his achievements, in 1977, Merv was elected chairman of the board of directors of the National Retail Merchants Association, an organization comprised of approximately 3,500 retail stores worldwide. At the time, Merv was the first West Coast retailer to head the organization in more than 60 years.

After he retired from Mervyn’s, Merv became Chairman of Morris Management Company, a family investment firm. He held many board positions, including serving on the boards of Dayton Hudson Corporation, Ross Stores, Pacific Gas & Electric Company, Vans Shoes, and the Oakland Tribune.

Merv also became a committed philanthropist and served as a trustee on numerous non-profit boards, including the Boys & Girls Clubs of America, the California Academy of Sciences, the Palo Alto Medical Foundation, Stanford Hospital, the Jewish Home for the Aged, Mt. Zion Hospital of San Francisco, and the University of Southern California. He was appointed to serve as a Trustee of the United States Holocaust Memorial Museum by President George W. Bush in 2002. He was also a civilian advisor to the Commanding General of the Army and Air Force Exchange Service.

Merv and Roz built an admirable philanthropic legacy during their nearly 66 years of marriage. They made a major investment to build the Mervin G. Morris Clubhouse for the Boys & Girls Clubs of the Peninsula. They were also committed supporters of the Peninsula Volunteers in Menlo Park, providing critical funds to build the Roslyn G. Morris Activity Center. Their philanthropic interests further included the San Francisco Symphony, the San Francisco Opera, and the United States Holocaust Memorial Museum.

Merv was the quintessential patriarch of his family. He was a devoted brother to his dear sisters and a remarkable father, grandfather, and great-grandfather. He was the master of the toast at every family affair and was deservedly the center of everyone’s orbit. To imagine a family gathering without him is unthinkable, but we can rest assured that his astounding legacy will live on for his family and for the broader community for many years to come.

Merv was predeceased by his loving wife, Roz, by his parents, and by his sister, Bertille. He is survived by his four children and their spouses — Diane, Jeff (Missy), John, and Jim (Susan) — and by his sister, Jacqueline. He is also survived by his 14 grandchildren, his 10 great-grandchildren, and by his devoted friend, Cynthia Hockey. The family is grateful for the excellent assistance provided to Merv by Vicky Evangelista, Shirley Schall, Esthela Prado, Hicenia Aguirre, and Jane Feng.

Merv’s family will host a Celebration of Life at a later date. In lieu of flowers, if you wish, the family asks that donations in honor of Merv be sent to the Boys & Girls Clubs of the Peninsula (401 Pierce Road, Menlo Park, CA 94025), Peninsula Volunteers, Inc. (800 Middle Avenue, Menlo Park, CA 94025) or a charity of ones choosing.

My high school after school job during my senior year was with Mervyns in San Lorenzo. Merv was much beloved, walking through the store, chatting up Customers and Employees alike. He gave back so much to so many communities of need. A life well lived.

sorry to hear……he had a good life and remember Mervyn’s as my go to store, as Macy’s was too expensive for me…..

Thanks for years of clothing and loyalty to the community…

As the Director of San Francisco’s Steinhart Aquarium, I met Merv and his family when he became a trustee of the California Academy of Sciences. He was active, supportive, and fascinated by our discoveries and educational activities, and invited me to speak about how and why some fishes change sex. His support of the Academy was shared by his daughter Diane and many of the philanthropic acquaintances to whom he introduced me. I must add that we shared a love for Delano in the Central Valley, where I always stopped for a root beer during my drive from San Diego to Yosemite. Delano would be proud to know how their native son prospered.

Sorry to hear of his passing
I spent 17 years at store 208 until a year before it closed. Great memories, still miss the store and people there. It was a great experience!!

Thanks for the update….see Denise, I do read your posts. Bob