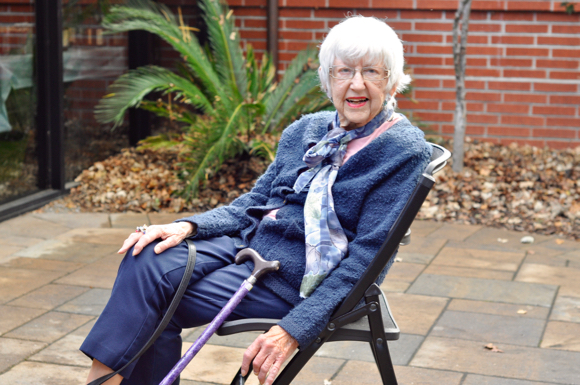 Jacqueline Ann Drew, R.N., M.P.H., died peacefully on October 5, 2021, at age 99, in Billings, Montana. She always attributed her long life to lots of chocolate and a drop of Scotch now and then. But her friends and family knew that it was her sparkling intelligence, curiosity about the world, volunteer work, and a great sense of humor that kept her in good health.

Jackie was born in 1922 in the village of Silver Creek, Nebraska. Her father was a doctor and her mother a nurse. The family moved to Billings, Montana in 1937. She followed in her parents’ footsteps, getting a nursing degree from Philadelphia Episcopal Hospital in 1945. She completed a Bachelor of Science in Nursing in 1948 from Montana State University in Bozeman, and subsequently helped establish the nursing program there by recruiting students. She went on to work as a nurse at Billings Deaconess Hospital, before moving to San Francisco in 1956.

She joined the staff of Stanford Research Institute in Menlo Park, California, as a researcher in public health. Jackie did postgraduate work at Stanford University and in 1968 earned a Master of Public Health degree from the University of Berkeley.

Jackie became a Senior Research Analyst at Blue Shield of California in San Francisco. She enjoyed her daily hourlong commute on the train from Menlo Park into the City. Fellow commuters became such good friends that they would celebrate birthdays along the ride with cake and gifts.

She drove a beloved 1963 powder blue convertible Triumph Spitfire for many decades. She travelled all over the world, including to France, Australia, New Zealand, Mexico, Morocco and South America. She volunteered at the Palo Alto UNICEF shop and was a firm advocate of the United Nations.

After retiring, she volunteered nearly full time for many years at the Menlo Park Library library. As a library “mole” she directed the Library’s annual Book Fair, spending most days of the week sorting donated books. She helped the library raise tens of thousands of dollars over the years. She also established the Mystery Readers Group. Her “Colloquium” was a group of older women who gathered monthly to share their original papers on a variety of topics. These endeavors kept Jackie engaged and happy.

At the age of 94, she decided to move back to her hometown of Billings. Jackie is survived by her sister Donna Forbes of Billings, and many loving nieces and nephews.