New petition to save and expand Flood Park launched 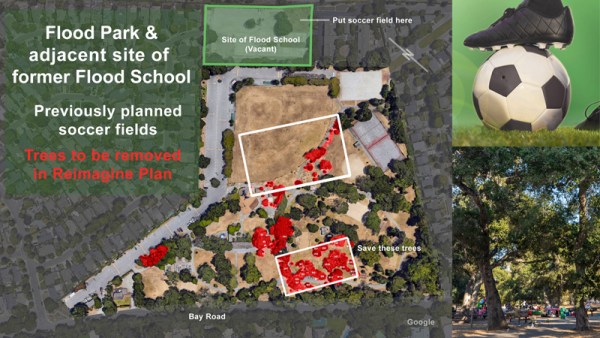 More than 2600 people have signed a petition to save heritage and other trees in Flood Park. Now, a second petition urges San Mateo County to extend Flood Park to add more sports fields by leasing the vacant Flood School site. The petition can be accessed at FloodPark.org.

Action needs to be taken quickly as the Ravenswood City School District seeks to lease the old Flood School site and plans to pick a development partner in the beginning of December, 2021.

“This land easily can provide new playing fields and recreational green space. It would expand the park’s ability to host a range of sports including baseball, basketball, pickleball, volleyball, and tennis. It will also add multiple soccer/lacrosse fields while maintaining the character of this beloved community park, the second oldest park in San Mateo County,” he continued.

According to Snow, extending the park to the former school site would preserve heritage trees and other trees in the historic woodland of the park. It would also save or expand existing picnic areas and children’s playgrounds. Benefits to surrounding communities include expanded green space — for sports fields and nature areas available to families, local groups, and school district students.

“This is a once-in-a-lifetime opportunity to extend Flood Park, and it’s a win-win-win-win opportunity that San Mateo County can deliver,” Snow added. “Winners are Ravenswood School District students and finances, local community youth sports and after school activities, sports leagues, and those who enjoy and learn from the unique nature of the historic Flood Park woodland. Finally, we all win with a park that meets the future needs of those in surrounding communities.”

Flood Park Advocacy encourages people to sign its petition asking the Board of Supervisors and County Management to act immediately to lease the old Flood School site, before it’s too late.

Adding Flood school property to the park will benefit all residents now and in the future, in the Menlo Park area, the county, and beyond. Playing fields are badly needed and youth sports build community by mixing kids from various areas and schools on teams. More diverse facilities will also encourage group rentals and other revenue producing usage.

This is a win-win for the County Parks system and for all of us who live nearby and use the park. Sign the petition at FloodPark.org to add more athletic fields while saving the historic woodland and family picnic areas……before it’s too late!