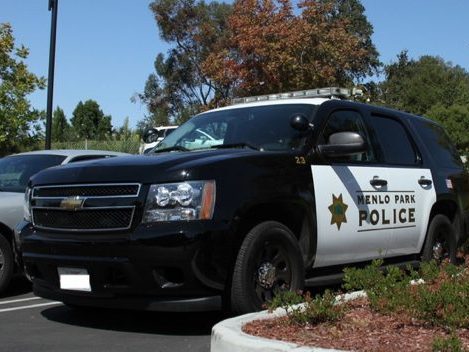 Coincidentally this morning, we ran in to Corporal Neumann and a number of other Menlo Park police officers taking a coffee break in Menlo Park near the Caltrain station.

We asked him about the shelter-in-place alert that went out for the entire city of Menlo Park yesterday about an armed suspect on the loose.

He explained that the incident took place in East Palo Alto and MPPD was called in for assistance and acknowledged that the county-issued alert was wider than needed.

MPPD public information officer Nicole Acker emailed: “Just for clarification, we, did not send out a Nextdoor message, so I’m guessing it was residents within Nextdoor conversing about a shelter in place notification they received.

“From what I know, we were assisting San Mateo County with a case of a wanted person. The vehicle of the wanted person was seen entering our City, and we attempted to conduct a traffic stop; however, the vehicle fled at an unsafe speed.

“It was relayed to me that a SMCAlert (emergency alert system) was intended to go out to a specific area that the person was thought to be in. I don’t have the particulars on the notification as it came from San Mateo County.”

Please, people, stop spreading misinformation and unnecessary fear and be rational. People do have cameras, there is lovely neighborhood watch and still certain people are full of unnecessary fear.