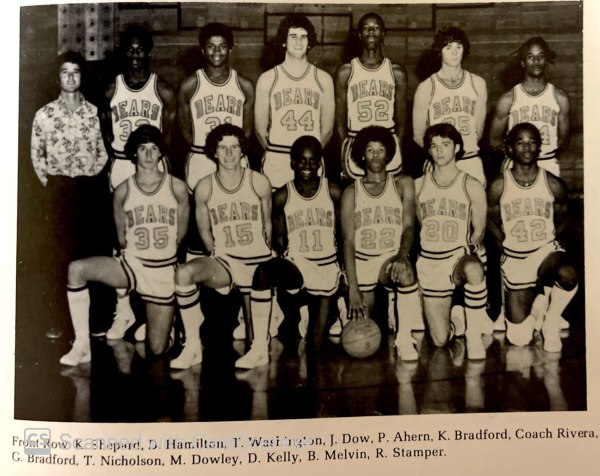 Editor’s note: We’ve had this post pending for years. With Bob Melvin leaving the Bay Area to manage for the San Diego Padres, we decided it was high time to dust it off and push it live! Bob attended Laurel and Encinal before heading on to M-A. In high school, He batted .474 with 11 home runs for the baseball team, including .529 his senior year when he was named to the San Jose Mercury News’ All-Central Coast Section baseball team. He also played basketball and is #25 in the photo above. Bob was the first student inducted into the school’s Hall of Fame.

Bob Melvin, who attended M-A between 1975 and 1979, and played both baseball and basketball, reflected fondly on his time at the school in an exclusive interview with The Mark [M-A’s magazine].

“Obviously it was sports oriented, but starting with Frank Bettencourt who was my baseball coach, it had a big impact on my life. I still take a lot of [Bettencourt’s] principles and philosophies with me right now,” he said.  “And then obviously I loved the high school basketball days, you know, packed gym. We had really good teams, so that was a lot of fun.”

Although basketball was his favorite sport in high school, Melvin always felt drawn to baseball as well. In the spring of his freshman year, he remembers legendary M-A coach Robert Ayers trying to convince him to run track. Melvin, however, could not focus because of the track’s proximity to the baseball field.

“I guess some of the baseball guys were out on the diamond and I was a little distracted. Because of baseball, it was kind of a tall order to get me to do track.”

From high school through the Major Leagues, Melvin played catcher, just like the Giants’ [former manager] Bruce Bochy and many other professional managers. He credits much of his success as a manager to playing that position throughout his time at M-A and UC Berkeley, and in the MLB.

“Being a catcher forces you to watch the game like your manager does because you’re in constant contact with him, whether you’re on the field and getting signs from him, or talking to him off the field,” he said. “In that position you’re really forced to think like a manager does, and I think that’s why you see so many catchers as big league managers.”