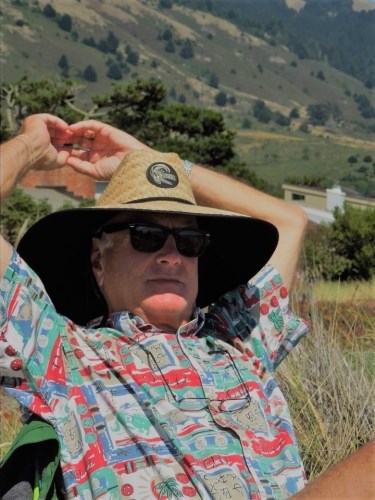 Joseph Sebastian Englert, Jr. passed away on November 13 at age 77 at home in Tiburon from complications of a stroke. He was surrounded by family  including his wife Vicki, brothers Karl, Steve, Mark and sister, Melba (Tracy). His children, grandchildren, in-laws Mary and Bryant Byrnes and lifelong friends were also at his side.

Joe was born at Stanford Hospital on April 10, 1944 to Joseph S. Englert, Sr. and Marina Englert (Barsotti). He grew up in Atherton, the eldest of five children. He graduated high school from Bellarmine Prep (having to board Senior year because of misbehaving), spent a year at Santa Clara University where he played football before transferring to Stanford and graduating in 1966. Joe went on to earn a Law degree from UCLA and an MBA from Cal.

He spent his 25-year career as an in-house counsel with PG&E in San Francisco while raising his family in Lafayette. One of his greatest achievements (according to Joe) was retiring at age 50. He and Vicki then moved to Tiburon with decades ahead of them to pursue a life full of travel, study, hiking, family and friends. Joe was an enthusiastic member of The Old Guard at the Bohemian Club.

Joe was known as ‘Gran’ to his three granddaughters and any number of other nicknames by his friends including Baby Joey and Jose. At the Zeta Psi House he was known as The Hairy Yak. Sometimes, he was referred to as ‘The Professor’ for his unsolicited sharing of his extensive knowledge of History, the Arts, Nature, Geography and Culture, all delivered with enthusiasm and confidence, if not always accuracy.

Joe and Vicki took great care to keep their children and granddaugthers close, always within a 20-minute drive in Marin County and San Francisco. He insisted that his granddaughters receive a good education. Joe was blessed with being an integral and exuberant part of their daily lives, an enthusiastic babysitter, attendee of countless soccer and volleyball games, plays, dinners, school events, birthdays, and holidays.

Joe was an armchair historian, intellectual, collector and lover of nature especially the ocean. He liked to muse that Rodeo Beach was his “private beach.” He spent decades exploring the Northern California Coast and hiking trails. He wandered for days in San Francisco museums. On rainy days he would walk to the Tiburon Library and spend hours pulling books off shelves finding endless adventure in their pages. When the Librarian saw Joe approaching, she knew to turn on the fire place.

He was proud that he read the entire Life Magazine series from 1936 to 1972. Joe’s life, especially as a collector, had a wide arc spanning from stamps and coins in childhood to miniature lead soldiers, antique military firearms, books, Persian rugs, artwork, all culminating in collecting Asian antiques and art. Joe was convinced they were priceless. He may have been the only person convinced of this!

During their marriage Joe and Vicki were adventurous world travelers. Trips included jaunts all over Europe, Africa, China, India, South America, Australia and New Zealand. They especially loved their own ‘back yard’ and traveled extensively in the U.S., Mexico, and Canada. On occasion Vicki would opt out, particularly the two-week trip to visit European World War I battlefields on a tour bus. She happily stayed home and rode her horse, Donner.

Needless to say, Joe had a unique personality and dry sense of humor. He created his own lexicon of nicknames and acronyms to describe any number of things which are not fit to print. He felt no obligation to play golf, drive a fancy car, drink expensive wine or know which sports team won the game. He was sometimes known to be a bit of a curmudgeon and tight with the purse strings. He knew what he liked.

People who knew Joe and ‘got’ him loved him for who he was. His best friends were Jeffrey Congdon, Ned Spieker, (going back to 2nd grade), Fergus Flanagan (Stanford roommate), and Donald Garrard (We take the 5th). In retirement he enjoyed taking his Stanford pal, Tim Wilson, on ‘wheelchair hikes’ throughout local forests and beaches.

Joe was content in his own mind – as his brother said, “He was his own best friend.” Years ago, on doctor’s orders he had to sit or lay face down not moving for a week after retina surgery. During his recovery he was asked if he was bored having to be still for so long. His answer, “Not at all, there is always plenty to think about.”

Joe requested he be cremated with his ashes spread at the grave of his infant daughter Regina Anne and his favorite stomping grounds in Northern California including a grove of Old Growth Redwoods which he found very Spiritual and always proclaimed “This is my Cathedral.” A celebration of life is being planned; details to follow.