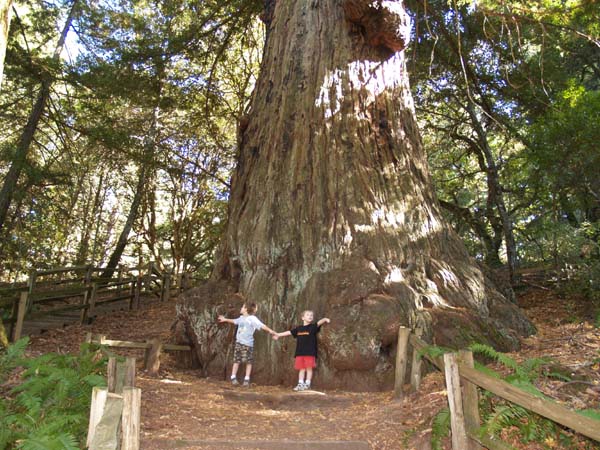 Long before Portola and his party explored the Peninsula, the area in and around Woodside was a vast forest of giant redwoods.  These great red trees, named in honor of the Cherokee Indian, Sequoyah, stretched down from the slopes of King’s Mountain and fanned out into the valley below.

When the first white man, Bill “The Sawyer” Smith, came to Woodside he was greatly impressed with the enourmous stand of timber and immediately began teaching the mission Indians how to cut lumber.

Later, other men joined “The Sawyer,” and in 1847 Charles Brown built perhaps the first sawmill in the valley.  Then in 1849 lumbering began in earnest and it wasn’t long before the giant redwoods began to disappear into shingles and lumber for the San Francisco trade.

With the passing of time the redwoods around Woodside gradually vanished — except one lone giant which was left standing as a living monument to all its neighbors who felt the bite of the lumberman’s saw.

The Skyline Methuselah Redwood, perhaps the largest standing redwood on the Peninsula, still remains where it has stood for over 1,500 years.  It is located on the bay side of the Skyline Boulevard about twenty-six miles south of San Francisco.  More than 55 feet in circumference, this remaining giant with its roots firmly embedded in the soil clings to the side of the mountain in defiance of man and the elements.

This old tree, if it were gifted with speech, could no doubt explain the mystery which has surrounded it for the past century.  Why was it left standing when all of its neighbors fell to the axe of the lumberjack?  Why was it singled out to be left untouched?  Why wasn’t it cut into shingles or lumber as its many neighbors were?

Editor’s note: This account of Methuselah Redwood was written in 1948 by Theon C. Gady. Here’s an entire website devoted to this famous tree.