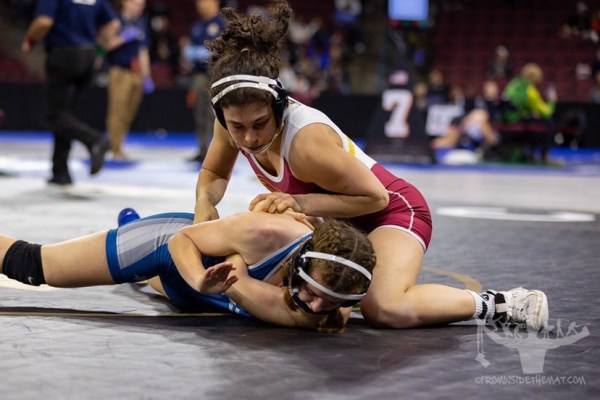 “I’ve definitely been looked down upon and doubted because of my gender. In many practices inside and outside of M-A, I have been either the last one to be chosen as a partner, or denied a partnership by other male wrestlers,” said CIF (California Interscholastic Federation) wrestling champion and M-A senior Alexia Bensoussan. 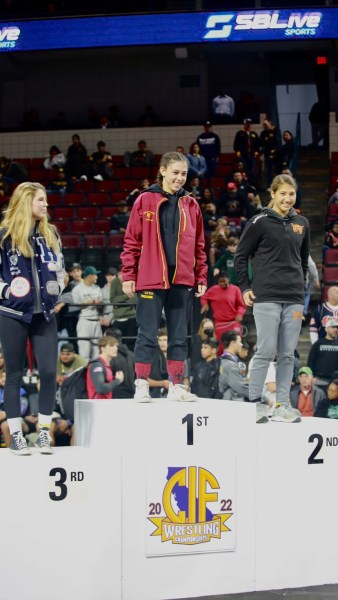 When Bensoussan broke her wrist playing varsity tennis her freshman year, she signed up for the wrestling team after a PE demonstration. While there is no doubt that signing up for a sport on a whim your freshman year is ambitious, Bensoussan achieved what she never thought was possible.

Bensoussan said she joined wrestling because no experience was needed. “I think that was what drew me the most to the sport — the ability to learn a completely different sport that I didn’t even know existed.”

After starting wrestling, Bensoussan’s strength and endurance were bound to improve. However, she said, “the biggest impact was definitely emotional because not only has wrestling taught me to manage my time and procrastinate less, but it has pushed my boundaries completely.”

Despite wrestling being an individual sport, Bensoussan argues it is often a team effort in which the wrestlers practice, warm up, and rack up points for an overall score.

“From training at six in the morning to wrestling in 12-hour long tournaments and traveling to Bullhead, Arizona during the pandemic for competition, it’s definitely been a lot. I think one of the craziest things I’ve done was to compete into brackets back to back.”

Although the girls wrestling team constantly gives it their all with six wrestlers in CCS this season, they are often underrepresented and overlooked.

Because girls wrestling was not considered an NCAA sport until last year, tremendously few colleges have girls Division I programs.

Bensoussan, frustrated with this underestimation, said, “When guys put in effort and wrestle hard with blood, sweat, and tears, their hard work is rewarded. But, when girls do the same it is seen as unconventional or even weird.”

Attending Duke University next year, Bensoussan hopes to “bridge this divide that exists between men and women in the sport — and hopefully initiate my own DI program there.”

Grace Hinshaw is a senior at M-A and in her second year in journalism. She is interested in writing about M-A’s sports teams and current events involving students. This post originally appeared in the M-A Chronicle.